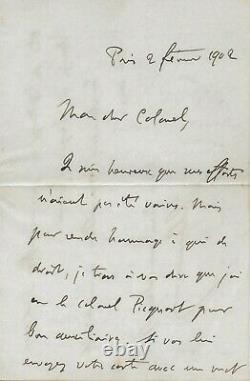 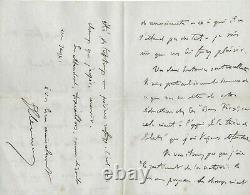 Georges clemenceau (1841 - 1929), French journalist and stateman. Signed autograph letter to Colonel Michel Alexander Gaston Tournier. Paris, February 2, 1902; 3 pages in-8°. Beautiful and rich letter from Clemenceau recalling the essential role played by Colonel Picquart in the dreyfus affair and revealing his love of the campaign and his attachment to his vendean roots: "My dear Colonel, I am glad that my efforts were not in vain. But to pay tribute; who by law, I would like to tell you that I had Colonel Picquart.

If you send him your card with a thank you note what he does not expect at all I am sure you will please him. Your two stories are excellent.

I am particularly pleased with what you tell me about your education among the "good fathers", because it is in support of the thesis of freedom that I have always defended. Don't be surprised that I am "the feeling of nature.

The field has always been a precious refuge. It's in the fields that I hope to die.

In the meantime, let us work, as a wise man said." Colonel Picquart was appointed to the statistical section, the military intelligence services, in 1895. Captain dreyfus, degraded, was sentenced to the bagne for intelligence with the enemy in 1894.

Colonel Picquart discovers in a paper basket a telegram written by the commander esterhazy whose writing is similar to the letter accusing dreyfus. He warns his hierarchy but this revelation disturbs, he sees himself transferred to tunisia. In 1898, when he returned to France, he was brought before a board of inquiry which reformed him for serious misconduct, accused of having fabricated the evidence in question esterhazy.

He was imprisoned for almost a year. But on the side of the dreyfusards he's seen as a hero.

After the judgment of the Court of Cassation annulling the first judgment, dreyfus was repatriated from Cayennes to be tried by a second council of war. The public trial began on 7 August 1899. He is again found guilty, but the sentence is reduced to ten terms of detention. Mathieu dreyfus convinces his brother to apply for a pardon instead of a risky cassation appeal. Emile Loubet, President of the Republic, pardoned alfred dreyfus.

He was rehabilitated with Colonel Picquart by the Court of Cassation only on 12 July 1906. Following the trial, Clemenceau, then president of the council, appointed Picquart as Minister of War. The item "georges clemenceau letter autograph signed affair dreyfus" has been on sale since Tuesday 25 May 2021. It is in the category "books, bd, magazines\old books, collection".