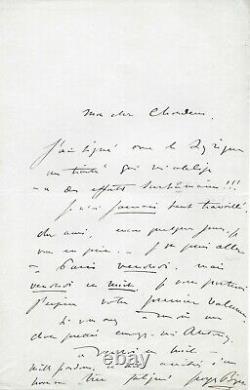 Georges bizet (1838 - 1875), French composer. Autograph letter signed to the musical editor Antoine de choudens. (circa 1866); 1 page in-8. Bizet is working on his new creation. \"My dear choudens, I have signed with the lyric a treatise that moblige to superhuman efforts!!! I've never worked so hard. Dear friend, a few more days, please. I can't go to betting on Friday. I will bring you isper our first volume a thousand pardons, and a thousand friendships of a well-tired man.\" This musical work certainly concerns the opera the pretty girl of Perth performed at the lyric theatre in Paris on December 26, 1867. Bizet completed its creation in December 1866 following an order for Leon Carvalho signed in July of the same year. It is a four-act opera that is received harshly by critics, which nevertheless underlines the progress made.

The item \"georges bizet autograph letter signed opera the pretty girl of perth\" is on sale since Friday, December 11, 2020. It is in the category \"books, comics, old books, collectibles\". The seller is \"cyril2472\" and is located in Lyon, Rhone-Alps.