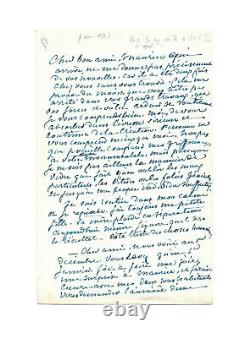 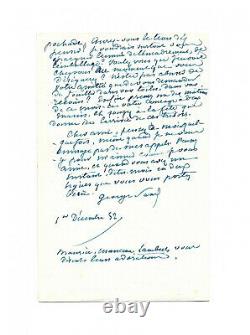 Autograph letter signed "George sand" to eugene delacroix [nohant], 1. December [18]52, 2 p. In-8 slight trace of an old montage on the fourth sheet. Magnificent letter from george sand to eugene delacroix - the painter is then in full decoration of the living room of peace at the betting city hall - in which she declares to him all her admiration for his art and which she would dare compare with her work as a writer.

The missive ends with the request of a canvas to the master (lelia) as a strenna. "Dear good friend, maurice [dudevant-sand] who is coming, don't tell me exactly about your news, for he has been with you twice without being present. This at least proves to me that you are not stopped in your great work, that your strength and your ardour are supported. I understand you well, I, to absorb you in the serious and continuous drunkenness of creation.

No one understands you better than I do; not that I want to compare my claws to your monumental work, but because I do not see anywhere else the way of life that makes one forget the particular evils, the foolishness or the general follies and up to his own suffering individual. I came home in my calmness and I'm snuggling.

I still have my granddaughter. His mother pleads in separation today. I do not know what will be the result - sad side of human things!

Dear friend, here we are at 1. You know that on the first floor. January, I have to make a joy, a surprise to maurice, and I still arrive with my two usual subs to ask you for the alms of a pochade. Will you have time to think about it?

Above all, I would like to spare you the boredom of framing, packaging? Do you want me to send you home as you designate?

Is it not abusing your friendship to ask you to search your canvases, your corners? Finally, take one of the mornings of this month your courage with two hands, and think of the feast that the arrival of these treasures gives here. Dear friend, think of me sometimes, even when I don't bother you with my calls. Think about it to love me as I love you, and when you have a moment, tell me in two lines that you are doing well.

December 52 maurice, [alexander] manceau, [eugen] lambert tell you their adorations. George sand returned from betting on 27 October, while his Mauritian son returned a month later on 29 November. Having been unable to meet his master at his workshop (he was then in the middle of a wall decoration of the peace salon at the Paris City Hall), Maurice told his mother. So it's the first one.

Unlike a cleopatra, paid two hundred francs by george sand the previous year, lélia is a gift of delacroix, and humbly dedicated "to maurice and to you". This is a small oil on canvas (24×18 cm).

The scene, inspired by the second version of George Sand's novel (1839), depicts "lelia in the monk's cave in front of his lover's body". Included in the donation a. Lauth-sand in 1923, the pastel is located at the museum of romantic life j. 1995, No 18 - Inventory No 89.73. On December 30, George Sand wrote: "This beautiful and beloved thing arrived tonight.

I made it open in a room with mystery, because I stand on the day of surprise, according to the old us. So I had it alone. " Sand also referred to family cases: on 31 August 1852 the court of first instance of the seine handed down the judgment of separation of the juries clesinger (solange clesinger-sand, daughter of george sand, and august clesinger). At first, jeanne-gabrielle, called nini, their child, is entrusted to george sand.

Solange arrived at Nohant on 5 January 1853 and stayed there until 12 February. This is probably the request for the separation of property. On 28 January, clesinger appealed the judgment of 31 August 1852.

George Sand was very attached to nini, but the child died shortly after the separation of his parents, betting on 14 Jan. 1855 of an ill-treated scarletine.

This letter bears witness to the indefectible friendship between the novelist and the painter. It began in 1834 and ended with the death of delacroix in 1863. It was born one of the most beautiful matches of the 19th century.