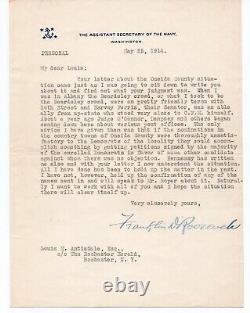 Antisdale, editor-in-chief of the rocker morning herald, Washington 25 May 1914, 1 page in-4, printed letterhead of the U. « your letter about the oneida county situation cam just as i was going to sit down to write you about it and find out what your judgment was.

When i was in albany the beardsley crowd, or what i took to be the beardsley crowd, were on pretty friendly terms with 14th street and harvey ferris, their senator, was an able ally from up-state who good very close to c. About a year ago judge o'connor, dempsey and other began coming down here about true post offices. The only advice i have given them was that if the appointments in the country towns of oneida county were carefully unsatisfactory to the democracy of the locality they could accomplishh something by getting petitions signed by the majority of the enrolled democracy in favor of some other candidate against who there was no objection. Hennessy has written me also and with your letter i now understanding the situation.

All i have done has been to hold up the matter in the past. Ih ave not, however, helped up the confirmation of any of the names sent in and will speak to mr. Naturally i want to work with all of you and hope the situation there will clear itself up. "Your letter about the situation in the County of Oneida arrived at the time I was going to sit down to talk to you about it and discover your opinion. When I was in albany, the crowd of bardsley, or what I considered to be the crowd of bardsley, was in fairly friendly terms with 14th street and harvey ferris, their senator, was a competent ally of the state that stood very close to c.

About a year ago, judge o'connor, dempsey and others began to come here about real post offices. The only advice I gave them was that if the appointments in the country towns of Oneida County were absolutely not satisfactory to the local democrats, they could do something by having petitions signed by the majority of the Democrats registered in favour of another candidate against whom there was no objection. Hennessy also wrote to me and with your letter I now understand the situation. All I've done is delay the case in the past. However, I did not delay the confirmation of any of the names sent and I will tell m.

Naturally, I want to work with all of you and I hope that the situation will be clarified. A graduate of the Harvard University and a member of the Democratic Party, Franklin delano roosevelt was elected governor of the state of new york in 1928 before winning the American presidential election of 1932. Faced with the great depression, roosevelt launched the new deal, a programme to revive the economy and combat unemployment.

He's reforming the US banking system and founding social security. He created many government agencies and succeeded in developing a new model of presidency, more interventionist and more active. He became one of the main actors of the Second World War, breaking with the traditional isolationism of his country. After the attack of pearl harpor, he fully assumed his duties as commander-in-chief of the American army and prepared for the victory of the allies. It plays a leading role in the transformation of the world at the end of the conflict, inspiring in particular the foundation of the unu. He leaves a very strong imprint in the history of his country and that of the world.

He is the only American president to have been elected four times. Congress adopted the xxie amendment to the constitution of the U., setting two terms of office for a president of the U. In 1914, the date of the document in question, he was then Assistant Secretary to the Navy appointed by President Woodrow Wilson the previous year.

Careful packaging, recommended shipping with ar. This item is in the category "collections\letters, old papers\autographs\historical persons". The seller is "galerie_jbm" and is located in this country: en. This item can be shipped to the following country: france.