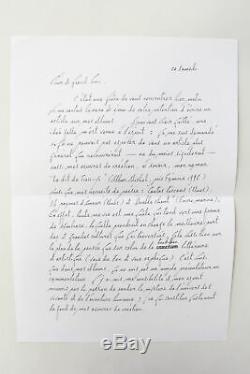 Autograph letter signed one-page and quarter-Francois Cheng to his \Two kinks inherent in the folding, envelope attached. In it all is humble and too deferential to george Raillard It was a grace to meet you yesterday morning.

I felt honored me and moved by your intention to write an article on my albums, \art calligraphy on his albums to better understand the pursuit and search of his art that feed bicultural marriage Sino-french and, more broadly, of a universal humanism: \you a more general article covers from - or at least would signal - also my creative works, namely, my novel ... In fact, my whole life is a quest which tends towards a form of symbiosis, which would take over the better part of two great cultures I have experienced. This both in terms of thinking as that of literary and artistic tradition (way of Zen and Orphic way). \which is precisely the bottom of my creative works. Beautiful letter to the pretty calligraphy, which sheds light on the universe and the inspiration of Francois Cheng and construction of his work. We also join the Friday issue 22 December 2000 of the \.