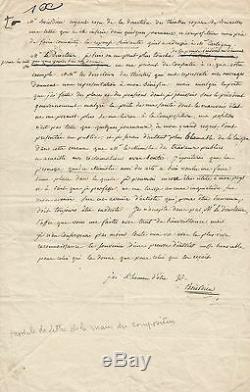 The bookstore autograph centuries has specialized for many years in the sale of autograph letters and manuscripts. Manuscripts of those who made the glory of the arts, literature, history and science in past centuries. Beautiful and moving letter declining financial Boieldieu ugly proposed brussels royal theaters. ouched by the show of love and interest for the arts you want to give me begging me to consent to qua your example mm directors of theaters that represented my works give a representation to my benefit, but despite losing I made squares and pensions which I enjoyed under the previous government, despite the loss of my health which the poor condition no longer allows me to indulge in the composition, my position is not as some newspapers, to my regret, lont presented to the public, and I would be even more reprehensible to let this mistake mr Minister of works hosted my complaints with b NETO. Jajouterai the promise that this minister friend of the arts has informed me of a place where I can still be useful to my country and to art which I profess, leaves me no worries about my future, this future of artist, to be happy, must always be modest. So I do not accept mr director, the offer you make me so kindly, but I will keep as much of my life with the most recognition Vice remember a proof also of interest to honorable the giver as for the one who receives. Faced with financial difficulties due to bankrupt the comic opera, Boieldieu wrote to the Minister of Education a very noble letter, praying that lattachât as custodians deposition music library of the king.

His friend cartigny, director of currency brussels, would organize a performance for his benefit. But he was considered Boieldieu dignity to refuse this generous offer, as we discover in this letter. Finally adolphe thiers, newly called to the Ministry of Education, came to the aid of the musician. He appointed him professor of composition at the conservatory. After a short trip in the Pyrenees, which was fatal, he came back to Paris, his home in jarcy campaign, and soon began to close their eyes on 8 October 1834.

This death produced a deep impression in the musical world and in the hearts of all those who, having approached the musician, had been enjoying the sweetness, generosity and moral rectitude who were the predominant qualities of his character. The item \The seller is \This article can be shipped worldwide.