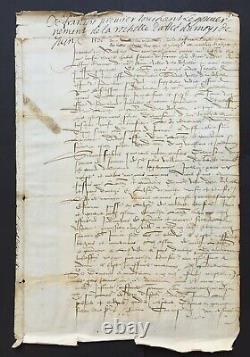 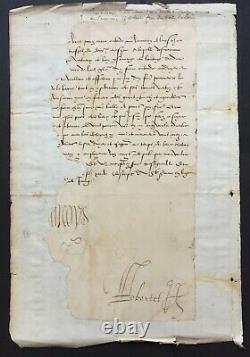 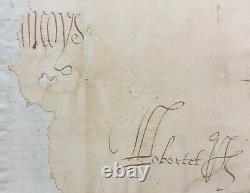 Francis ier King of France - document - letter signed 1536. An emblematic king of the period of the French renaissance, his reign allowed an important development of the arts and letters in France. On the military and political level, the reign of François ier is punctuated by wars against charles quintet major diplomatic facts.

Domestically, his reign coincided with the acceleration of the spread of reform ideas and better management of the state and territory. Francis ier introduced a series of reforms affecting the administration of power and in particular improving the return on tax.

2 pieces: a document and a signed letter. Letters patent, 1 page, concerning thetronization of charles chabot in his important functions as governor and perpetual mayor, June 1536, unfortunately incomplete document of his 2. \"As we have been very dear and loved cousin charles chabot, lord of jarnac, knight of our order, of the office of mayor of our good city of the rock, which have erected in perpetual office, and nevertheless have promised audict lord of Jarnac to hold the office of governor of the city of la rochelle, office of presiding and superior of the office of mayor national immediately in nostre court of parliament in Paris, in which he is faict and presided over the oath of said office of judicature in and appointed governor, and at the office of our lieutenant and governor of the rock and country daulnys ayct is by us forveu of the person of our dear and much loved cousin and brother-in-law the king of Navarre , by means of what was the said lord of jarnac in trouble on the exercise dudict office of our lieutenant and governor if on this ny is a good statement of our voulloir and intention.

Scavoir let us feel aware of the person of said lord of jarnac, his senses, valour and dexterity good and great dilligence and experience, icelluy for these causes and fallre to what we die have faict and make our lieutenant and governor of our so-called city of rock and country daulnys in the absence of our cousin said and brother-in-law the king of Navarre. Letter signed \"Francoys\" (incomplete signature; thus signature king or secretary), countersigned by florimond robertet, saint german in Laye, June year 1524?

Unfortunately incomplete document of a fraction of the left part of the text. Letter concerning the king's intervention in ecclesiastical affairs.

Having become vacant, the Bishop of The Year recommends that the governor of the rock, favour the election of the protonotaire Antonin of the bar, brother of the bailiff of bets. Antonin of the bar actually became bishop of Angelum in July 1524.

\"You may have heard the vaccation of the levesche [dangoule by the] trespas of the last bishop to whom desires the virtuous and good character to the praise of god[conserva] of said church, has made them hear to the dean and [chapter] the voulloir and affection that jay den fere can the [protonotaire] of the bar so much in consideration of his good virtues and conversation as in favor of the grans. And pleasant [that] do me every day the bailly of betting his brother and [as] you are near the place and I say that will do ensuyvre and intention of your power, you have kindly advert [of] that with the delegates by us and otherwise you have to go through said dean and chappitre at the time of their election. There employing your friends, so my will. And you will do me very pleasant service and [may God have you to] keep him. Escript to saint german in layday of juing.

\" First canon of Saint-martin-de-tours, then abbot of Saint-catherine-lès-rouen. Francis ler the bishop of angoulême in 1524, then archbishop of towers from 1527 to 1547. The item \"French King of France document - letter signed 1536\" is on sale since Saturday, March 27, 2021. It is in the category \"collections-letters, old papers-autographs-historical personalities\". The seller is \"judi75000\" and is located in bets.