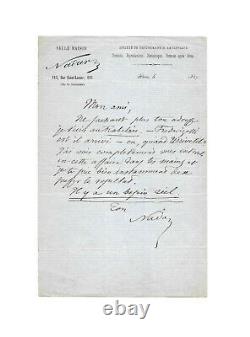 Autograph letter signed nadar to a friend s. D [paris, 1857], 1 p. In-8 traces of usual folds. Nadar, financially abject, claims accounts from a friend with whom he has invested.

I don't know your address anymore. I'm typing at the rabelais. Did Frederigotti arrive or when did he arrive? I put my interests in this case completely in your hands and I urge you to press the result.

There's a real need. In the same year 1857, a judgment of the Imperial Court of Paris restored the exclusive property of his pseudonym nadar, under which he signed his writings and which would be used by his photographic workshop under the guidance of his son. Indeed, the pseudonym nadar had first been used by a company formed around its younger brother adrien tournachon, in the form nadar young and nadar jne, sometimes causing confusion. The item "felix tournachon, dit nadar / letter autograph signed / photograph / money" has been on sale since Thursday 8 July 2021. It is in the category "collections\letters, old papers\autographs\others".