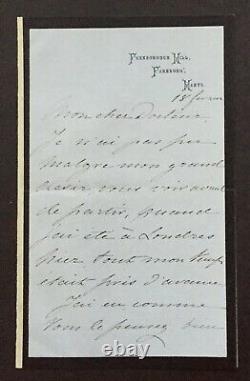 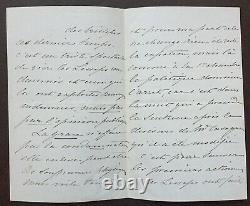 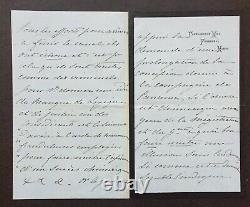 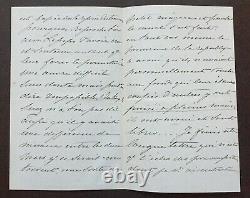 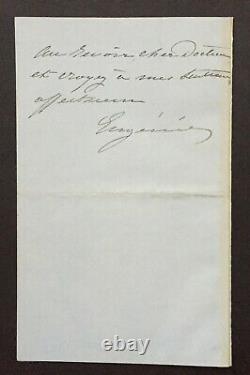 Eugenie Empress of the French important autograph letter signed on lesseps and the panama scandal. At the fall of the empire, she took refuge in exile in the United Kingdom. Because of the regency she exercised during the war of 1870, she was the last woman to have ruled France with the prerogatives of a head of state. Signed autograph letter, farnborough hill February 18 [1893], to a dear doctor, 7 pp.

Superb letter on the condemnation of the famous Ferdinand de Lesseps and the panama scandal, a very important corruption case linked to the drilling of the Panama Canal, mixing French politicians and industrialists, which ruined hundreds of thousands of savers and shook France at the end of the 19th century. \"it is a sad sight to see the condemned lesseps and those who exploited them dismissed unscathed, but not by public order. Grace does not prevent condemnation.

It may remove the physical suffering there remains the cassation, but there as in the chamber, politics dominates to save the first shareholders that the Lesseps made every effort to finish the channel. They have failed and that is why they are being treated like criminals.

Why blame the lesseps for believing and sustaining as much as their forces allowed a difficult work? Even the public prosecutor confessed that they had not personally received the funds entrusted to them.

Others have tapped into it, they have confessed and are free.\" The panama scandal is linked to the financing difficulties of the universal company of the interoceaanic panama canal, the company created by Ferdinand de Lesseps to raise the necessary funds and carry out the project. After the company went into liquidation, which ruined the subscribers, several politicians were accused of corruption. The scandal then came to light. 104 parliamentarians are reported to have received money.

Ferdinand de lesseps, charles de lesseps, gustave Eiffel and their associates were in a 1. The item \"Empress Eugenie autograph letter signed lesseps / scandal panama 8 p\" is on sale since Friday, December 4, 2020. It is in the category \"collections-letters, old papers-autographs-historical personalities\". The seller is \"epistole\" and is located in bets.