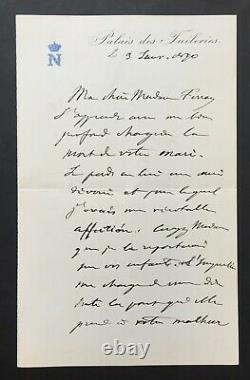 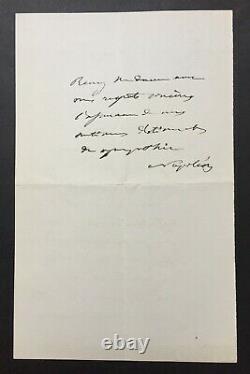 Emperor napoleon iii autograph letter signed 1870. He is the only President of the Second Republic, the first President of the French Republic. His coup d'état of 2 December 1851 allowed him a year later to restore the empire by becoming emperor of the French, thus putting an end to the second republic. Its foreign policy made it possible to restore French power in Europe and in the world by breaking the diplomatic isolation of the country, wanted at the congress to come.

Tensions with prussia led to the Franco-German war of 1870 and the fall of the second empire, then the proclamation of the third republic. Autograph letter signed "Napoleon", palace of tiles, 3 January 1870 (a few months before the disaster of sedan), 1 page 1⁄2, with its crowned figure.

Letter addressed to Eleonore-helene bugeaud, Countess henri falay, daughter of Marshal bugeaud and wife of General Willey. Nice letter of condolences for the death of General Willey, faithful support during the two-December.

"I learn with deep sorrow the death of your husband. I lost in him a devoted friend for whom I had a true affection. Believe me, ma'am, I'll report it to your children.

Limpératrice instructs me to tell you the whole part of your misfortune. The coup d'état of 2 December 1851 by which louis-napoléon bonaparte, President of the French Republic, retained power a few months after the end of his term of office. On the morning of 2 December 1851, louis-napoléon bonaparte issued six decrees proclaiming the dissolution of the national assembly, the restoration of universal male suffrage, the convocation of the French people to elections and the preparation of a new constitution to succeed that of the second republic. Very good condition sent by registered mail. The item "Emperor Napoleon iii letter autograph signed 1870" has been on sale since Saturday, August 14, 2021.