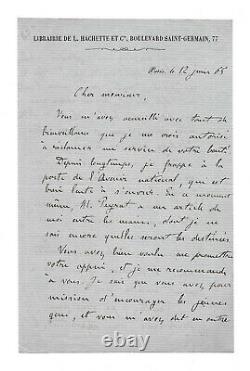 Autograph letter signed "emile zola" to the national future [probably to henry foquier] bets, on June 12, 1865, 2 p. 1/2 in-8 to header of the bookshop hachette & cie. Beautiful unpublished letter of the young zola in the form of a petition and with the aim of having his articles and tales published to ninon. "Dear sir, you have welcomed me so kindly that I think I am allowed to ask for a service of your goodness.

For a long time, I have been knocking at the door of the national future, which is very slow to open. At this very moment, Mr Peyrat has an article of me in his hands, of which I do not yet know what the destinies will be. You have kindly promised me your support, and I commend myself to you. I know that your mission is to encourage young people and that you have also told me. So please have the extreme compulsion to help me a little in my struggle, and to get an answer that I dare not go for myself.

I don't know if I should ask you for a second favor. I venture to tell you very lowly that I would be very grateful if you had the opportunity to say some words of my tales [to ninun] in the future that has not yet spoken to me. Please forgive my imports and believe me your whole devoted and grateful emile zola." It would appear that this letter is addressed to henry fenquier with whom zola is then in contact. Fouquier is indeed part of the team of the national future of which a. Peyrat is the director and editor in chief. Zola will only publish articles in this newspaper much later in 1873.

The literary itinerary of emile zola is initially marked by hesitation and research that reflects a self-taught journey following difficult schooling. He is noticed at hatchet after having delivered a poem, then hired by the house as a clerk where he eventually occupies a job equivalent to that of modern press attachés.

His first published book is a collection of tales, ninon tales, the substance of which originated from texts written since 1859. He was ill when he wrote this book.

The twenty-year-old zola expresses itself, already with talent, in a form that is easy to publish in the press and whose imperial administration is fond of. The following year, Zola began writing her first great literary success: Thérèse Raquin. This item is in the category "collections\letters, old papers\autographs\others".