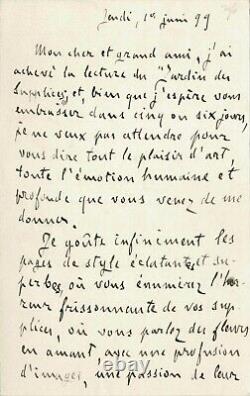 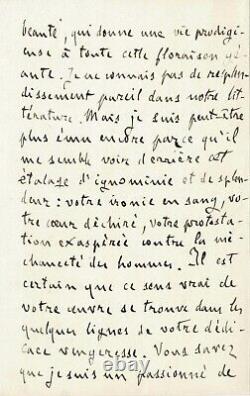 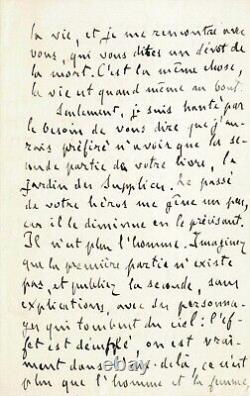 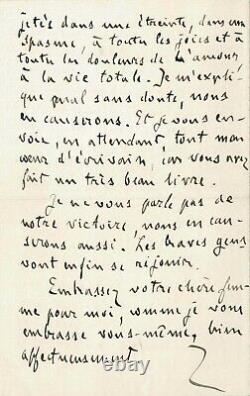 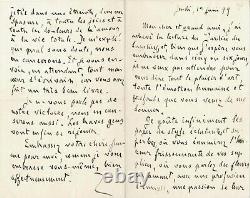 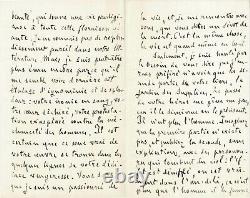 For many years, the autograph library has specialized in the sale of autograph letters and manuscripts. Autograph letter signed "z" to mirbeau octave. "I'm not talking to you about our victory. The good people will finally rejoice. Superb letter from zola, on the eve of his return dexil, congratulating his friend for his work the garden of tortures and evoking the decision of the judges of the Court of Cassation in the dreyfus case.

"My dear and great friend, I have finished reading the "garden of torments", and, although I hope to kiss you in five or six days, I do not want to wait to tell you all the pleasure of art, all the profound human emotion that you have just given me. I taste infinitely the brilliant and superb pages of style, where you list the shivering horror of your torments, where you speak of flowers by loving, with a profusion of images, a passion for their beauty, which gives a wonderful life to all this giant flowering. I don't know any resplendent like that in our literature. But I am perhaps even more moved by what seems to me to see behind this shameful and splendourful display: your irony in blood, your torn heart, your exasperated protest against the wickedness of men. It is certain that this true sense of your work is in the few lines of your dedication to revenge.

You know I'm a passion for life, and I'm meeting you, who say you're a devotee of death. It's the same thing, life is still at the end.

Only, I am haunted by the need to tell you that I would have preferred to have only the second part of your book, the torture garden. Your hero's past bothers me a little, because he decreases it by specifying it. He's no longer a man.

Imagine that the first part does not exist, and publish the second part, without explanation, with characters falling from the sky: the effect is tenfold, we are really in the Hereafter, it is more than man and woman, thrown into a embrace, into a spasm, to all the joys and pains of love, to total life. I guess I don't understand.

We'll talk about it. And I'm sending you, in the meantime, my entire writer's heart, because you've made a very beautiful book.

I'm not talking about our victory, we'll talk about it too. Kiss your dear wife for me, as I kiss you very affectionately. Octave mirbeau published his novel the garden of tortures. At carpentier fascielle in June 1899. Roman "murder and blood" according to the very terms of its author, dedicated. "the priests, the soldiers, the judges, the men, who educate, direct, rule the men, these pages of murder and blood." The book aroused many reactions through the violence of his images and the power of his exoticism.

Attacked for defamation following the publication of his "Jaccuse", zola was sentenced in the summer of 1898 to one year's imprisonment and 3,000 francs of fine, the maximum penalty. Despite the appeal in cassation, and on the advice of his lawyer laborori, zola sentenced, immediately left the france to sexilate in angleterre, before the verdict was officially served on him and became enforceable.

In London, he remained attentive to the evolution of the procedure until his return to France on 4 June 1899. The relations between mirbeau and zola, oscillated for a quarter of a century between contempt and veneration.

It's the dreyfus case that finally reconciles the two men. Gathered together and driven by their hatred of injustice, they take the blame for linnocent. When the struggle becomes more intense and the life of zola is threatened, mirbeau stands firmly beside the "holy man". For this, he writes, petitiones, makes the bodyguard when zola has to go to the courts under the hostile cries of the antidreyfusard, and goes as far as to support him financially. On 8 August, mirbeau, in order to avoid the seizure of zola's property, went to versailles in order to pay, from his pocket, to the collector of seine-et-oise, the 7,525 francs to which zola had been sentenced.

At the beginning of 1899 he also went to angleterre to morally support the exiled man, without ever forgetting, in france, to take care of Dalexandrine, his wife. Zola's death on September 29, 1902, did not interrupt this friendship. Beyond death, mirbeau continues to pay tribute to the author of.

He set up, within a committee, the pilgrimage of Medan. Check out our manuscripts The Autograph Gallery of Centuries specializes in the sale and expertise of autograph letters and manuscripts of the great personalities of past centuries.

All our shipments are made in registered mail with insurance at a flat rate of 10 for France and 20 for the rest of the world. We can also ship by private carrier at your request. Conditions of sale in accordance with the practice of the international league of the ancient bookstore, we accept a guarantee of return within 14 days. The return costs are borne by the buyer. About all the pieces proposed are originals whose authenticity we guarantee.

Our invoices serve as proof of authenticity of the parts sold. However, at your request, we may issue a certificate of authenticity, in addition. The item "emile zola letter autograph signed. 1899" has been on sale since Monday, April 19, 2021. It is in the category "books, bd, magazines\old books, collection".