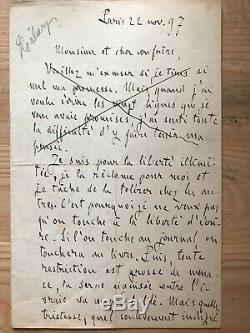 Signed autograph letter [to henry bérenger]. Two pages on a bifeuillet, 20.6 × 13.2 cm. Historical document: the zola manifesto for the freedom of the press, in the middle of the Dreyfus affair, three days before the publication of his first public statement, in the figaro, in favor of the revision of the trial, and nine days after the lunch decisive in the vice-president of the Senate scheurer-kestner, whose revelations convinced him to join the camp dreyfusard.

This is zola's response to the investigation of \Announced as of the December 4th issue, zola's letter will be published on December 18th less than a month before I accuse ...! Sir and dear colleague, [this first paragraph is stricken with two oblique lines] please excuse me if I hold my promise so badly. But when I wanted to write the twenty lines that I promised you, I felt all the difficulty of putting my thought into it. I am for unlimited freedom, I claim it for myself and try to tolerate it in others. That's why I do not want to touch the freedom to write.

If you touch the newspaper, you will touch the book. Then, any restriction is big of threat, the sharpened billhook against the tares will cut the wheat.

But what sadness, what an indignant uprising of conscience in the face of the abominable work of the lower press, whose commerce, the traffic in the curiosities of the public, is enervating, poisoning the nation! My heart is bleeding, and it takes a painful effort of my reason to keep the serenity of hope. Even so, I want to believe the initiating and liberating press, working on more education, more light.

The torrent, even impure, will fertilize everything. The truth can only be through freedom. Here, sir and dear colleague, what I would have liked to tell you better and with the necessary developments.

Emile Zola \Scheurer-Kestner \The writing of our letter is contemporary with that of this fundamental article: the two texts, of similar expression on several points, testify to the reflections and the zola position during this crucial period for itself as for the third republic, on issues that are at the center of the Dreyfus affair and remain current. The reading of the survey on \I believe in fact that she does more good than harm. But some newspapers are no less guilty, frightening some, terrorizing others, living scandals to triple their sales. Zola's article concludes with this historical formula, repeated a few weeks later in a slightly different form in my accusation ...! \On the subject of the \Thank you very much for his always helpful comments: \Letter published without the first paragraph, with approximate date, unable to consult the original in correspondence, under the direction of bard h.

Bakker, volume ix, annotations by owen morgan and alain pagès, the presses of the university of montréal and editions of cnrs, 1993, p. Note in pencil in the upper left corner of the first page, perhaps a mark of belonging: \Traces of creases, very light foxing and stains.

The item \The seller is \This item can not be delivered, the buyer must pick it up.