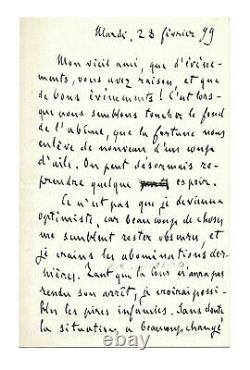 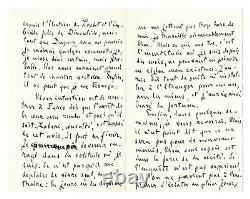 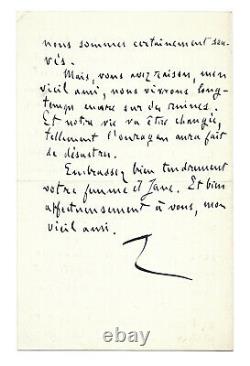 My old friend, of events, you are right, and that good events! This is where we seem to touch the bottom of the abyss, that fortune takes us back a sudden Daile. We can now resume some hope. It's not that I become optimistic because many things seem to remain obscure, and I fear the past abominations.

[Of Cassation] naura rendered its judgment, I believe can be the worst infamies. No doubt much has changed since the election of [Emile] Loubet. And limbécile madness [Paul] Déroulède. Is in power I believe a retraction, I say nose certain, but probable. Our friends would be very wrong to sing victory. Finally, it may be that I'm wrong.

My intention and return to Paris as soon as The Judgment of the court will be made, and what that it is. [Fernand] labori [lawyer Alfred Dreyfus and Emile Zola] consulted, is also of this opinion.

I am beginning to become rabid in solitude or I am. It's not that it displeases me to live alone, on the contrary: the days or dispatches do not shed too much out of me, I worked admirably well. But what kills me, this is the uncertainty which I for months, unable to foresee or solve my existence. Jaurais due immediately minstaller abroad for a year with my family, and so jaurais braved fortune.

Finally, in a few weeks, I will see you again. But he said nest point it will not be for more trouble. My only hope and the power of truth. If the investigation is not deleted if lon can not lempêcher déclater the full day, we certainly saved. But you're right, old friend, we still live long in ruins.

And our lives will be changed, so hurricane has made disasters. Kiss your wife tenderly and jane. Well affectionately yours, old friend.

1- Emile Zola welcomes the death of President Felix Faure opponent determined retrial and notorious anti-Dreyfus dies 15 days earlier in the arms of his mistress at lélysée Palace. 2 October 27, 1898, the Criminal Division of the Court of Cassation exam begins the request for review. That nest on June 3, 1899, after numerous hearings, the court of appeal overturns the judgment of 1894 and refers to a new martial. He is the founder of the League of Patriots, one of the pioneers of French nationalism movements. Although defender of the army, he believes in innocence of Dreyfus. Zola alludes to his coup attempt détat during the funeral of Felix Faure 23 February 1899. Arrested, Assize acquitted in court, high court ruled and eventually banned (expelled in Spain), it enjoys a pardon in 1905. Acceding to Chairman of the Board in November 1898, with determination soppose retrial, hence the zola skepticism. Following his open letter jaccuse!

To President Félix Faure, published in Aurora January 13, 1898, Emile Zola sees prosecuted by the general block. The trial Demile Zola will be held from February 7 before the Assize Court of the Seine through fifteen hearings. After many legal twists, Emile Zola is convicted and sentenced to the maximum penalty, or 1 year in prison and 3,000 francs damende 18 July 1898. Pushed by his lawyer Fernand lexil labori and George Clemenceau (then editor of the newspaper laurore) emile zola begin 11 months Dexil, forced the media silence but expressed openly his commitment to his family as evidenced by this letter.

Because it felt watched and monitored, Zola saw to it that anonymity be preserved as possible. Note that only the letters of the writer Dexil were signed e dun, dun and later z, which were for him a way to encrypt its shipments, although his writing is unmistakable.

Proven by homesickness, he is deeply affected by the state of political affairs in France (never the entries situation I think most disastrous). Alexandrine, his wife brings him full support and lencourage to continue its fight. He defined himself as the editor of naturalists. His publications include Zola [which he was the friend and relative who was one of the only ones to visit him during his London lexil], Gustave Flaubert and Maupassant. He was also an avid collector of art that promoted the Impressionist painters.