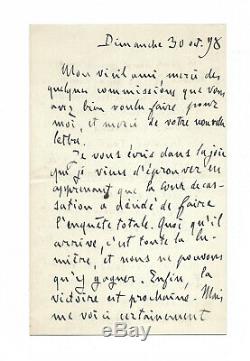 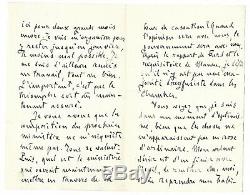 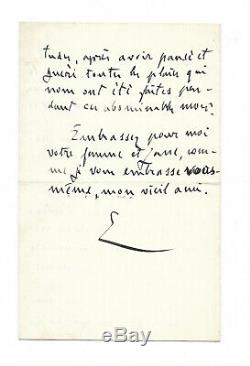 [Grosvenor Hotel, London] Sunday, October 30 4 8 pages in black ink, on laid bi-leaflet. Historic letter in which Zola welcomes the announcement of the revision of the Dreyfus trial. \My old friend, thank you for a few commissions that you have wanted to do for me, and thank you for your new letter.

I am writing in the joy that I have heard that déprouver Cassation Court the investigation decided to complete. What it hits, this is all the light, and we can not win Quy. But certainly here I am here for two long months yet.

I'm going to stay morganiser jusquen January the least possible harm. I dailleurs back to work, so good. Limportant, this is the triumph that was now assured.

I confess that the composition of the next ministry not even minquiète. Then, what is the ministry now who would dare stand in the court of cassation? When lopinion will be with us, the government will be with us. After the report of [Alphonse] bard and the indictment of [Jean-Pierre] manau, I challenge that he has not a ny Dreyfusist majority in the rooms.

You see I'm in a moment doptimisme, although things did not mapparaissent dordinaire in pink. My longing is den end lexil, to go home and resume my habits, and having dressed healed all the wounds that were made to us during these abominable month. Kiss me your wife and jane, as I embrace you, my old friend. The Dreyfus affair takes first turn on 30 August when the commander Henry - known to have produced false documents to be accused Captain Dreyfus - confesses in the presence of the Minister [of war] cavaignac.

A second major change will take place on October 29 when the Criminal Division of the Court of Cassation declared admissible the application for retrial. Following the publication of his open letter \After his appeal, he was again sentenced to sitting July 18 and decided, on the advice of his relatives, went into exile in London to escape the prison.

This letter, written from England, shows the reaction from the Zola. Following the announcement of a retrial to be held in the summer of 1899. The item \collections \ letters, old papers \ autographs \ others.