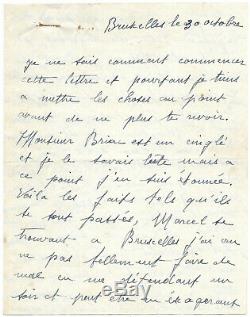 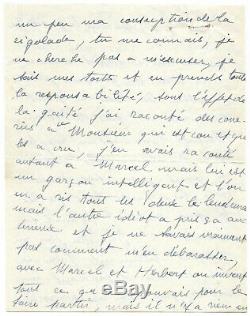 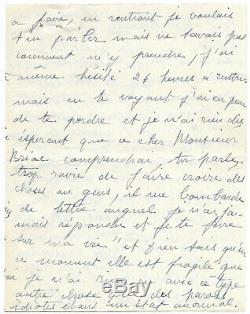 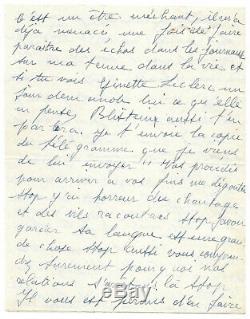 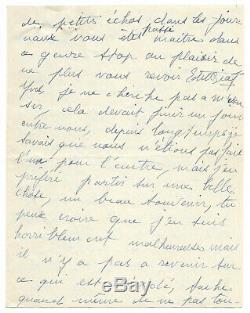 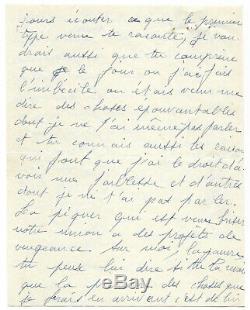 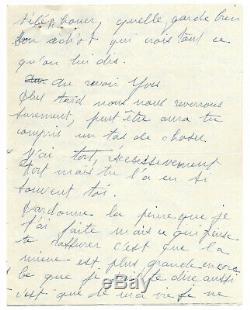 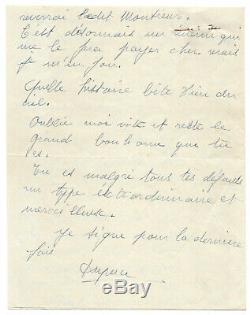 Autograph letter signed in the text \Brussels, 30 October [1945] 8 pages in-8. Central fold traces due to shipment somewhat dated, old dagrafe track without damage to the text.

Long and moving letter breaking dedith sparrow to Yves montand. \I do not know how to begin this letter and yet I want to put things straight before not to see you again. Briac is a lunatic, and I knew the beast but at this point jen am surprised. These are the facts as they happened, marcel located in brussels i thought not so much hurt defending me one evening and may be exaggerating a bit my idea of ​​fun, you know me, I'm not trying to mexcuser I know my mistakes and take full responsibility, under the effect of cheerfulness i told the bullshit to the gentleman who's stupid and believed them, jen had told much marcel but he is an intelligent boy and lon has laughed all both the next day but the other idiot took it seriously and I really did not know how men get away with marcel and herbert were invented everything quon could to make him go but it ny has done nothing. [Sic], on returning I wanted ten speak but did not know how my prendren I even hesitate 24 hours back but seeing you i was afraid of losing you and I nai not say anything hoping that dear Mr. Briac understand (sic) you talk too thrilled to believe things to people, he bombards me letter which [sic] I never responded and I swear on my life and god know quen this time it is fragile I havent had anything with this type anything but silly words in an abnormal state. This is an evil being, he already threatened me once seem to echo in the newspapers about my outfit in life and if you see ginette leclerc one day asked what it thinks, Beatrice also speak ten. I tenvoie copy of the telegram I just send 'your processes to achieve escape me me dripping stop jai horror blackmail and vile storytellers stop learn to keep his tongue is a great thing stop as you probably understand why our relationship sarrêteront there stop you permitted den make small echoes newspaper are you past master in this genre stop the pleasure of not seeing you edith piaf. Do not try to mexcuser, it had to end one day between us for a long time I knew we Netions not lun for each other, but favorite game from a beautiful thing, a beautiful memory, you can believe that jen am horribly unhappy but ny's no going back on what is decided, stain still does not always listen to what the first guy you tell, I also want you to understand [sic] that the day i'm limbécile there was [sic] came to me say appalling things I do not even talk tai [sic] and you know also the reasons why i the right to have a weakness and others which I do not speak tai [sic]. The sting that came to break our union has plans for revenge. On me, the poor, can you say if you see her the first things I do on arrival this is to call him, what keeps well its idiot who believe everything quon tell him. Later we meet again surely, will you be including a lot of things. Jai wrong, wrong too but you have to so often you. Forgive the trouble I made tai but what can assure you this is that mine is even greater.

What I can also tell you that this is my life I will never see Mr. This is now a mistake that will pay me dear but I mad men. What a silly story god of the sky.

Forget me quickly and remains the largest bonhome that you are. You are despite your faults extraordinary kind and wonderful. I'll sign for the last time. The love story between Edith Piaf and Yves amount, which lasted only three years, was as short as passionate. In the fall of 45, \Occurred at the tavern the great age at time of writing this letter breaking after receiving a telegram from montand saying \Between jealousy montand who was experiencing his first love and the many pranks sparrow, end their relationship became so stormy.

However, they continued to meet again in the first quarter of the year 46 before putting a final end. Note that thanks to Edith Piaf's career of Yves montand was launched, although the latter confided afterwards: \ The item \The seller is \This article can be shipped worldwide.
henrihowgustavepaulparisjeaneugenehugojeansvictoralexanderfrancelouisraresignedsignatureandréletterautograph signedautographjulesdocumentsignnapoleonpainteremilecharlesbeautifulzolalettersgeorgemarcelmailautographswith