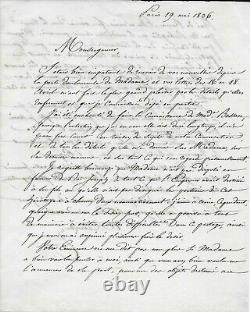 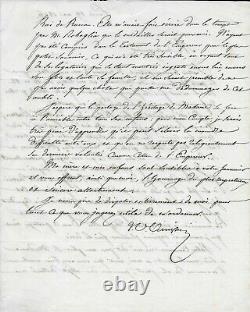 The Duke of Padua expresses his desire to recover the napoleon medallion, the only memory, which was intended for the king of Rome, who has since died, in the succession of Madame Mother. He is sorry to have been forgotten in the will of the timekeeper when those who have been gratified are ungrateful.

\"Monseigneur, I was very much looking forward to hearing from you since the painful loss of Madame [laetizia bonaparte, half-on of cardinal fesch 12 years her senior], and your letters of 16 and 18 April Mount is the greatest pleasure in the details which contain and which I already know in part. I very much regret that madame did not dispose in favour of the King Joseph of all that themper had intended for her son or that the portions of this inheritance were not designated to each two nominatively: I my love to believe, however, although you did not tell me, which provided all in order to avoid any difficulties in sharing, as I have expressed to you several times. Your eminence also does not tell me whether Madame was willing to think of me, as you were kind enough to tell me, for one of the objects intended for the king of Rome [the son of Napoleon].

She had me written back in time by m. Robaglia that the medallion would be for me.

Nayant was not included in the will of the keeper for the smallest memory, which was very sensitive to me, seeing all of his legatees who were ungrateful to him, to his son and all his family, and would be painful for me not to have anything that could compensate me for this oblivion. I hope that the sharing of Madame's refuge will be done among all her children: on my behalf, I would be very ineventable to learn that he can remove the slightest difficulty between them, and that one does not religiously respect his last wishes as that of the slowman. My mother and children are sensitive to your memory and offer you and me the most respectful and sincere attachment. I beg you to have me entirely for all that you deem useful to bite.\" Jean-thomas arrighi de casanova Duke of Padua , napoleon cousin on his father's side, a native of Corte in Corsican, close to Joseph Bonaparte, was appointed governor and then representative of Corsican by Napoleon, aide-de-camp of the Berthier general, he participated and distinguished himself during the Napoleonic campaigns in Egypt, austerlitz, friedland, essling, wagram etc.

He represented the mother of Napoleon during the succession of the rider in January 1834. He retired from the military in 1837. Despite the end of the empire, he remained faithful to misfortune, keeping sincere affection for the emperor and for all members of his family.

The item \"Duke of Padua autograph letter signed to Cardinal fesch napoleon heritage\" is on sale since Tuesday, November 10, 2020. It is in the category \"books, comics, old books, collectibles\". The seller is \"cyril2472\" and is located in Lyon, Rhone-Alps. This item can be delivered anywhere in the world.