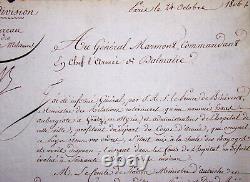 Letter signed to August general of Marmont, Duke of Ragusa, Commander-in-Chief of the Dalmatian Army. A letter signed by General dejean, minister of war administration to General Marmont, in which he asked him to search for and arrest an innkeeper from the town of Gretz, administrator of the city's hospital, who disappeared by taking 60,000 guilders from the hospital's funds, taking advantage of the departure of the army corps that occupied the country under the orders of General Marmont.

Napoleon fled entrusted several important missions, then the administration of the war, finally appointed him grand treasurer of the Legion of Honor. Napoleon sent General Marmont to head a French army in Dalmatia in 1806, of which he was appointed governor general before being made Duke of Ragusa in 1808. The item \"dejean, general.

Signed letter to general mum, Duke of Ragus. 1806\" has been on sale since Friday, February 26, 2021. It is in the category \"collections-letters, old papers-autographs-historical personalities\". The seller is \"qumranstjacques\" and is located in lille.