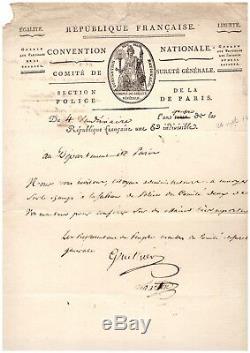 Section of the Paris police, vignette address. Two days after dune day in Paris royalist dagitation, following the proclamation of the constitution. \We invite you, citizen Director, to send immediately to the police section of the committee, two of your members to confer on very important business.

The people's representatives, member of the committee of general safety. The National Convention was promulgated 22 August 1795, a new constitution (called constitution lan iii). This constitution laid the foundations of a new political regime: the Executive Board. September 23, 1795, the constitution was accepted by 1,057,390 against 49,978 yes not.

But sinsurgent royalist circles against a decree that Thermidorians took on 18 August. To know that two-thirds of the members of the new Legislative Councils shall be selected from conventional. Exasperated, the royalists trigger an armed insurgency and threaten the agreement. On October 5, they are crushed by the young General Bonaparte (nicknamed subsequently \The item \The seller is \This article can be shipped worldwide.