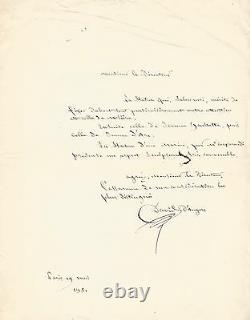 The autograph bookstore of the centuries has specialized, for many years, in the sale of autograph letters, and manuscripts. Manuscripts of those who made the glory of the arts, literature, our history and science in the past centuries. Very nice letter from the sculptor about the statues of molière and darc jeanne presented at the salon of 1851. Director, the statue that I think deserves to be fixed first is that of molière.

Then the one of jeanne hatchet, then that of jeanne darc. The statue of a sailor by m.

Corporandi has a very suitable sculptural aspect. Approve, sir, the director, theurance of my most distinguished consideration. The work of david dangers is considerable.

There are no less than sixty-eight statues and statuettes, fifty bas-reliefs, a hundred busts, more than five hundred medallions. On the hundred busts, it should be noted: victor hugo, fayette, goethe, vigny, lamartine, beranger, musset, arago, balzac, chateaubriand , paganini for statues, he is talma lauteur (French comedy), horn (rouen), root (ferté milon), gutenberg (paris; strasbourg jefferson), thomas jefferson (washington). In 1830, he received control of the pediment of the pantheon which he finished in 1837, regularly defending his visions of artists, in the face of the injunctions of those responsible for administration and policy. Inauguration took place in September 1837, without danger, unthred.

In the monumental works, we must also mention larc de Triomphe in Marseille, with three bas-reliefs and various trophy decorations, renowned. During the revolution of 1848, he was appointed mayor of the 11th arrondissement of paris and then elected deputy by the department of the maine and loire.

He sits at the Constituent Assembly and defends the existence of the school of fine arts and the academy of France in Rome. He was able to destroy the atoning chapel and remove two statues of the larc of triumph (resistance and peace of the day and e).

He also voted against the prosecution of white louis, against the appropriations of the Roman expedition, for the abolition of the death penalty, for the right to work, for the general amnesty. In 1851, at the time of Napoleon iii, he was arrested and sentenced to lexil.

He chose Belgium and then travelled to Greece. The item \"david dangers autograph letter signed. The moliere and Joan of Arc statues has been on sale since Tuesday, November 1, 2016. It is in the category \"books, comics, old books, collectibles\".