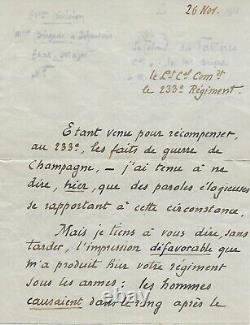 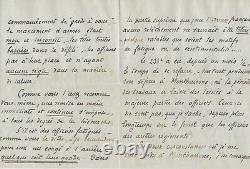 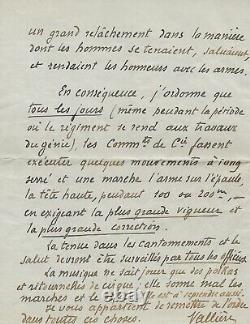 Pierre emile des vallieres (1868 - 1918), French Brigadier General. One of the 42 French General Officers who died in combat during the First World War. The fact of arms that marked his career was the battle of the women's path between August 29 and September 5, 1917. He obtained the cross of war for the 403rd infantry regiment that led the fight, and he received a new citation to the order of the army. He died on May 28, 1918 at the age of 49, killed at the head of his division. 26 November 1914; 4 pages small in-4 on letterhead "Colonel des valières cdt la 101e brigade à m le lt cel comdt le 233e Régiment" terrible letter of the young promoted, Colonel Valières, against the unit of Colonel Hepp, after his arrival after the beginning of the battle of champagne.

According to him, the soldiers did not meet the requirements of the French army's rules in a crucial moment of the conflict. "Having come to reward, in 233rd, the facts of war of champagne, - I wanted to say, yesterday, only words of praise relating to this circumstance. But I want to tell you, without delay, the unfavorable impression that your regiment produced yesterday under arms: the men were causing in the rank after the command of "guard to you", the handling of weapons was soft and incorrect, the heads all lowered in the parade; the officers not in their place and having no rules in the way of greeting. As you have recognized yourself, an immediate and continuous hand-over is required at all levels of the hierarchy.

If he's tired officers, as you say, I'll ask them for a leave of absence in the back, whatever their rank. In the supreme part of the French army, no relaxation can be tolerated, regardless of the reasons for fatigue or sentimentality. The 233rd had, for a month 1⁄2, the time to recover, especially during his stay in Monthairons, where the period of work left leisure to most of the officers. These are not, as I know, longer on the front than the officers of the other regiments. The two circumstances when I went to Monthairons, I noticed a great relaxation in the way men stood, greeted, and rendered honours with arms.

As a result, I order that every day (even during the period when the regiment goes to the engineering work), the cie commts carry out a few movements on a tight row and a step the weapon on the shoulder, the head high, for 100 or 200m, demanding the greatest vigour and the greatest correction. Detention in cantonments and salvation will have to be monitored by all officers. The music can only play walkas and waltzes of circus; it doesn't sound like marches and parades. She's to be taken over, too.

It is up to you to restore order in all these things. " This item is in the category "books, bd, magazines\old books, collection". The seller is "cyril2472" and is located in this country: en.