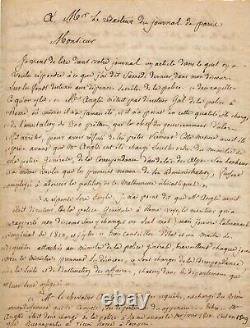 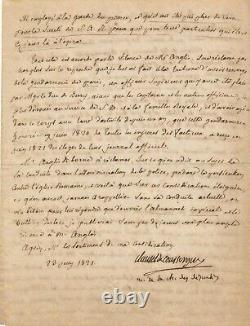 Signed letter addressed to the editor of the betting journal. Jules Dangles and the assassination of the Duke of berry.

He replied to an article published in the press about the activities of dangled jules then stationed in the prefecture of betting police. Some blamed him for the attack on the Duke of berry at the exit of the opera on 13 Feb. He denied what he had said about some of the past activities of Dangles, who, between 1809 and 1813, became master of requests to the State Council in the 3rd district of the General Police, a division responsible for correspondence with the annexed departments, including that of Roma. Quil would have arrested 300 priests who refused to take the oath.

However, he pointed out his allegiance to "the tyranny of Bonaparte" with his 11,525 letters written to the various police officers in Italy during his years. He also pointed out his lack of support for the current police budget and his failure to protect the Duke of berry. The item "clausel de coussergues duc berry assassination letter signed jules dagnles" has been on sale since Thursday, March 14, 2019. It is in the category "collections\letters, old papers\autographs\historical persons".