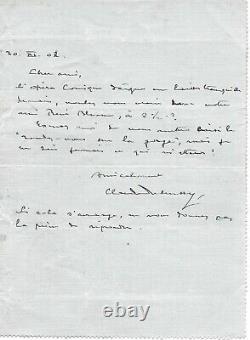 Claude debussy (1862 - 1918), French composer. Autograph letter signed to gabriel mourey. November 20, 1908; 1 page in-8, address with stamp on the back. Letter relating to an appointment at the time of a resumption of performances of \"pelléas et mélisande\", a five-act lyrical drama first depicted on April 28, 1902: \"The comic opera deigns to leave me alone tomorrow, do you want to come and see our friend reborn blum, at 2 1/2? Excuse me for putting the \"appointment under your throat\" in this way, but I never know what to expect!

He offers him several texts to set to music in doped and ballet form. In 1912, Mourey, seizing the revival of debussy's interest in Greek mythology, asked him to compose the stage music for his play in psychedelic verse. Of all the proposed projects it is the only one that succeeds. But in the end he wrote only a flute solo, a piece of about three minutes illustrating the first scene of Act iii, mourey marveled at it.

The item \"claude debussy autograph letter signed opera pelléas et mélisande\" has been on sale since Friday, December 11, 2020. It is in the category \"books, comics, old books, collectibles\". The seller is \"cyril2472\" and is located in Lyon, Rhone-Alps. This item can be delivered anywhere in the world.