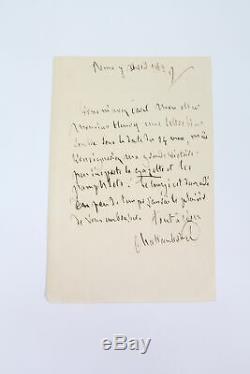 François René Chateaubriand of - autograph letter signed by Mr. Henry: No matter the Gazette and the pamphlets!

Henry, 10 lines on a slip. Appointed ambassador to Rome by King Charles X, chateaubriand moved to the end of 1828 in the simonetti palace. With the Holy See it performs as well as possible to its mission, which was to support religious independence from France; he approaches the pope xii leon, \He charmed his holiness with witticisms and reassured on the remarks against him that wrote in. Regardless of the Gazette and the pamphlets! The death of leon xii February 10, 1829 ended the chateaubriand patient efforts to establish good relations with the Holy See and hoped the appointment of a French cardinal.

Having failed to influence the conclave to the appointment of his successor to the throne of Saint Pierre and anxious disorders that took place in Paris, he wishes to leave the city ( \The writer had hoped to live his Roman embassy with his love always, even récamier but spent those months in melancholy, accompanied by his heavenly woman who badly bear life in Rome. The tone of the letter betrays the enthusiasm of his imminent return to Paris, where awaits the beautiful Juliette. Rome April 7, 1829 you wrote to me my dear sir henry a grim letter under date of March 24, but you never knew my great victory. Regardless of the Gazette and the pamphlets! In a short time I will have the pleasure of embracing you.