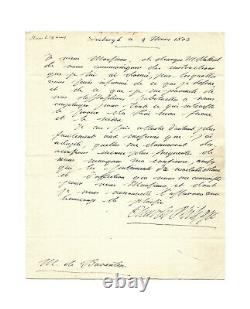 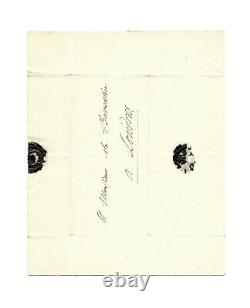 Autograph letter signed " charles philippe " to charles de barentin edinbourg, 4 March 1803, 1 p. In-4, autograph address with remains of black wax stamp. Charles x, then in exile, renews his confidence in the last guard of the seals of louis xvi.

I have just come, sir, to instruct Mr. Dutheil to give you instructions that I have given him, by which you are informed of what I desire, and of what I promise from our usual dispositions to employ you for all that interests the service of the king my brother. [future louis xviii] and mine.

I have devoted myself all the more easily to the measures that I have adopted, which will give me even more frequent opportunities to show my confidence in you, since the sentiments of genuine esteem and affection that you know me for you, sir, and whose assurance I renew with great pleasure. The Count d'Artois, future charles x, was one of the first to emigrate on 16 July 1789. He travelled through the various European courts to seek defenders of the royal cause. During his years of exile, he went to great-bretagne where he passed the rest of the revolution and the first empire. He was accused by Napoleon 1st in his will of having maintained the men who sought to assassinate him, an attempt which was the origin of the death of the Duke of Enghien.