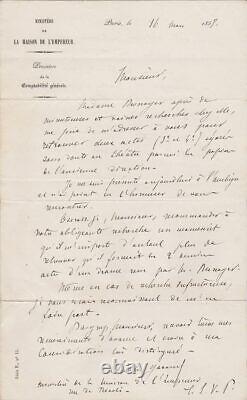 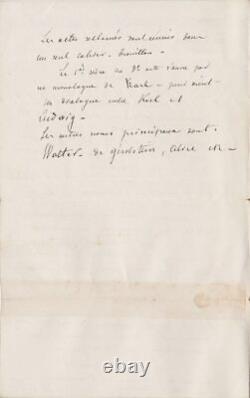 His widow is looking for the last two acts of a drama received by the playwright, probably lost in the papers of the theatre. Thus, he addressed the new director of the ambiguity and asked him to look for them. Charles de Chilly was appointed director of the ambiguity on 3 February 1858 after the death of desnoyer charles. His skilful management brought back to this theatre the public who had moved away from it. After giving him prosperity, which was gradually to disappear again under his less happy or skillful successors, he became associated in 1867 with the direction of the theatre of the odeon, where he was signalled by his experience as director.

Madame desnoyer after careful and vain research in her home, asks me to address you to find two acts (3rd and 4th) probably lost to the theatre among the papers of the old management. I introduced myself today to the ambiguity and did not have the honour of meeting you. I would dare, sir, to recommend a manuscript to your obligatory that it is all the more important to me to find it because it provides the last 2 acts of a drama received by m.

Even in case of unsuccessful search, I would be grateful if you would share it with me. Daignez, sir, receive all my thanks in advance and believe in my very distinguished consideration. Charles garand ministry of the emperor's house rue de rivoli. The acts claimed are gathered in a single sketchbook. The first scene of the second act opens by a karl monologue - then comes a dialogue between karl and ludwig. The other main names are: walter, gerolstein, alice, etc. Charles Garrand is a French dramatic author.

Charles de Chilly is a French theatre actor. He succeeded especially in the employment of traitors and the direction of theatre. More information on chilly charles. This is an authentic letter.

This letter shall be accompanied by a descriptive sheet including a transcript. The invoices and cards we issue are instead of a guarantee certificate. France free shipping private carrier on request. Shiltonson letters autographs & historical documents. This item is in the category "collections\letters, old papers\autographs\historical persons".