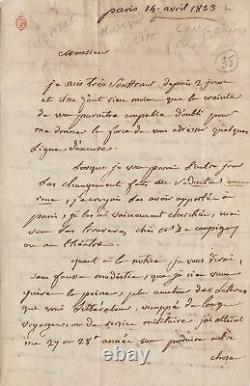 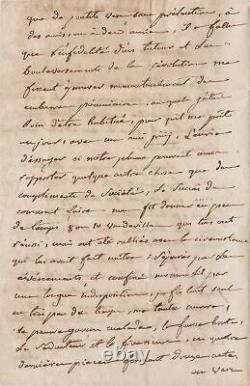 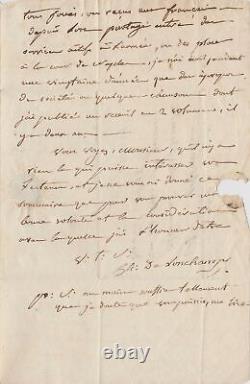 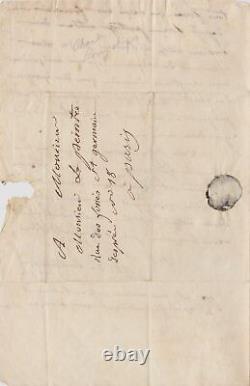 I've been very ill for two days, and it takes nothing less than the fear of being guilty of oblivion to give me the strength to send you a few lines of apology. When I promised you the other day of the changes made to the lover seducer, I thought I had brought them to bets, I vainly sought them, but you will find them at mr de coupigny or at the theatre. As for the record, I will tell you, without false modesty, that I am hardly worth it, more amateur of letters than true littrator, occupied with long journeys, or military service, I have reached my 27th or 28th year without producing anything other than little worms without pretension, to friends, or to friends, it was necessary that the infidelity of a guardian and upheavals of the revolution made me experience momentarily pecuniary embarrassments, to which I was far from being accustomed, so that he took me one day, with my friend jouy, the desire to try if our pen could bring us back anything other than social compliments, the success of how to make us give us in a short time 9 or 10 vaudevilles, which all succeeded, but were forgotten with the circumstance that had brought them forth; separated by the events and confined on my bed by a long indisposition, I did all alone in a very short time, my aunt aurore, the poor sick boy, the false shame, the seducing and, all these four pieces, all in the last twelve pieces, made up. Since then, shared between active services in the army, or places at the naple court, I have written for about twenty years only periods of society or some songs of which I have published a receuil.

In two volumes, two years ago. You see, sir, that there is nothing that may interest your readers, and I have given you this summary only to prove to you my goodwill and the consideration with which I have the honour of being. S: My hand suffers so much that I doubt you can read me.

This is an authentic letter. This letter shall be accompanied by a descriptive sheet including a transcript. The invoices and cards we issue are instead of a guarantee certificate. France free shipping private carrier on request. Shiltonson letters autographs & historical documents.