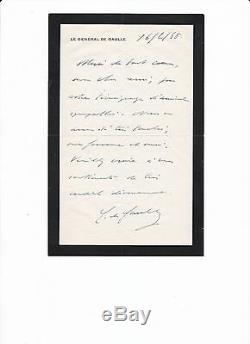 It is a friendly response to condolences on the death of his daughter in 1948. Charles de Gaulle commonly known as General de Gaulle, born November 22, 1890 in Lille and died November 9, 1970 in Colombey-les-deux-églises, is a military, resistant, statesman and French writer.

Leader of Free France then leader of the French National Liberation Committee during the Second World War, President of the Provisional Government of the French Republic from 1944 to 1946, President of the French Council of Ministers from 1958 to 1959, instigator of the French Republic founded in 1958, he is president of the French Republic from January 8, 1959 to April 28, 1969. He is the first to occupy the supreme magistracy under the fifth republic. Raised in a culture of national grandeur, Charles de Gaulle chose the career of an officer. He is taken prisoner during the first world war. He serves and publishes around Philippe Petain, advocating with politicians the use of armored divisions in the contemporary war. In May 1940, Colonel, he was placed at the head of an armored division and led several counter-attacks during the Battle of France; he was promoted Brigadier-General on May 25, 1940. He was appointed Under-Secretary of State for War and National Defense in the Reynaud Government, during the Exodus of 1940. He rejected the armistice requested by petain to Nazi Germany. From london, he launches, at the bbc, the call of June 18 to the French people to resist and join the free French forces. Sentenced to death and declared deprived of French nationality by the Vichy regime, he wants to embody the legitimacy of France and be recognized as a power by the allies. Controlling only a few colonies but recognized by the resistance, in 1943 he fused Free France into the French National Liberation Committee, which he eventually took over. He leads the country to liberation. Favorable to a strong executive, he opposes the parliamentary projects of the parties and resigns in 1946. He founds the rally of the French people (rpf), but his refusal of any compromise with the \crossing the desert \De Gaulle returns to power during the crisis of May 13, 1958, during the war in Algeria. Invested president of the council, it makes approve the ve republic by a referendum.

Elected President of the Republic, he wants a \It strengthens the institutions, the currency (new franc) and gives a third economic role to a planning and modernizing state of the industry. He gave up in step with French Algeria, despite the opposition of the Blackfeet and the military, who had favored his return. He also decolonises black Africa, maintaining the French influence there. De gaulle advocates ealizes the French nuclear deterrent force, removes france from NATO's military command, vetoes the entry of the united kingdom into the European community, supports the \Communist China.

His vision of power, that is to say, a leader directly approved by the nation, opposes it to the communist, socialist and centrist pro-European parties. They criticize a too personal style of governance, even a \It overcomes the crisis of May 68 after appearing to withdraw, convening legislative elections that send an overwhelming Gaullist majority to the National Assembly. But in 1969 he began his mandate on a referendum (on Senate reform and regionalization) and resigned after the victory of \He retired to his colombey-the-two-church property, where he died eighteen months later. Charles de Gaulle, considered one of the most influential French leaders of his century, is also a renowned writer.

He notably left war memoirs, where he claims to have always \This old document is the original. I guarantee the total authenticity. The item \The seller is \This item can be delivered anywhere in the world.