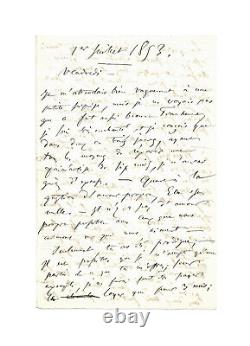 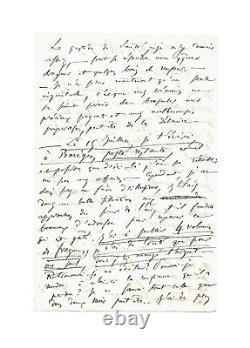 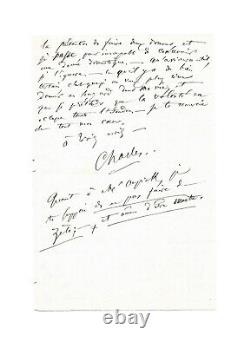 Autograph letter signed "charles" to her mother, Madame aupick [paris], 1. In-8° small old repair to the scotch on the seal break, without damage to the text. Remarkable letter to his mother where it is a question of will, the keystone of the Baudelairian creation.

"Friday - I expected a little surprise vaguely, but I didn't think it was so beautiful. Frankly, I am very delighted, and I see that in two or three days, having every means to repair a six-month laziness, I will have little excuse. As for the issue of self-esteem, it sucks. There is no self-esteem possible with those we love and who love us.

Only, you have been prodigal; - it is possible that I accept only part of what you offer me; for example, I may not charge. The rent only for three months; the question of health, - I know enough about it, - can be solved with a few drugs and a few steam baths. I now have only one concern, that my creditors have allowed themselves to push my precious packages and my unfortunate paperwork, perhaps to destroy them. - July 15th, I'll write to you at barèges, post office left. [water town and resort of the aupick couple] and it's possible that by then I've been able to get my things back a little bit.

However, I don't have to make any illusions, I was in a good situation on New Year's Eve approaches, and it will take a lot of skill to fix what's spoiled. I have to publish four volumes of fragments, I only have a treatise for one, whose money I ate. Will I find a publisher? Will I be able to restore to him the trust he lost?

I'll only know all of this in two of me maybe. I also claim to make two dramas [the end of gift juan and drunkenness], and I pass as incapable of conceiving a dramatic data. What will happen, I don't know. What is certain is that I don't want to give anything to chance in my life, and that I claim that the will occupies the entire extent of it.

I thank you for all my court. Aupick, I beg you not to be zealous, and even to be mute. We know in what financial situation a lot of his life has been spent. Thus he repeatedly asked his mother, with whom he had a fusional relationship.

This letter follows a more generous sending than usual to help him, which is not customary. By evoking the publication of "four volumes of fragments", Baudelaire has clear editorial ambitions: he wants to gather the criticisms in various newspapers and magazines that he has previously published to make books of them. Moreover, it is not excluded that he also thinks of the flowers of evil. He then referred to projects for the theatre; indeed, he did not dream exclusively of being a poet, as he recalls in my bare court: "As a child, I wanted to be pope, but military pope, sometimes an actor.

I was enjoying these two hallucinations. However, Baudelaire had little illusion about his talent: "I am unable to conceive a dramatic data." It thus detachs itself from a certain bovarysm. Nevertheless, if poetry is not the theatre, we can detect some theatricality in his work, as roland barthes explains in his introduction to the "theatre of Baudelaire" (1964): "this powerful theatricality is only in the state of trace in Baudelaire's projects, while it runs largely the rest of the Baudelairienne's work.

Everything happens as if baudelaire had put his theatre everywhere, except precisely in his theatre projects. Finally, the poet, far from putting this difficulty on account of chance, seeks to avoid it. The whole is thus based on the "will", the keystone of its conception of creation. "Landscape", in the flowers of evil (second edition, 1861), first poem of the section "Paris paintings", actually praises it, by a quasi-sacralization of the creative will.

Attests the incipit: "I want" and the verses "because I will be immersed in this voluptuousness, / to evoke spring with my will", which lead the whole poem. Baudelaire makes creation a divine mission. In post-scriptum, Baudelaire also refers to what allows us to make the hypothesis of a prospect of appeasement of his relations with his father-in-law. Armand Gody Collection, Catalogue No. September 1917 baudelaire, correspondence, ed.

This item is in the category "collections\letters, old papers\autographs\others". The seller is "laurent-autographs" and is located in this country: fr. This item can be shipped to the following country: whole world.