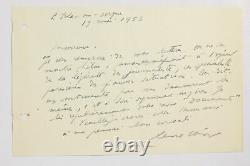 The correspondent of rene char is the former editor-in-chief of the journal documents published between 1929 and 1931, reborn Wintzen, and reborn char entrusts to him "I regularly read your journal documents". René Wintzen has been publishing a magazine since the end of the war, wind up. It also organizes meetings between authors.

René char thanks him for his letter and assures him that his feelings for him have remained sympathetic. The poet told him of his distrust of the daynalists: "Unfortunately, we are never sufficiently distrustful of the lightness of journalists, these Parisian specialists of false situations." This suspicion of journalists dates back to the end of the war. René Char is then celebrated as Captain Alexander for his active participation in the resistance. At the same time, the midday red communist newspaper began a campaign of slander by accusing the poet of liberating and misappropriating goods. These accusations touch the tank and his anger increases disproportionately when one of the mid-red junalists, georges dubois, is suspected of having ordered the murder of his gabriel besson war companion.

English translation available upon request. This item is in the category "books, bd, magazines\old books, collection".