Celine Autograph Letter Signed In Tuset And Henri Mahe Everything Is Poetry! 1947 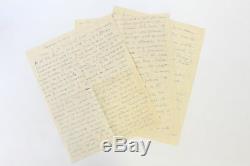 Very long autograph letter signed \The date given by the author of 10 March is incorrect, naud not agreeing to defend Céline in April 1947. Folds inherent in the enveloping that caused tiny tears without lack of text.

Weakened by its exiled céline takes refuge in correspondence where multiple evocations past constitute pins which relate to life. In 1947, Celine, pursued by the collaborationist French justice for his commitment, is reclusive in Korsør, in Denmark. Exhausted by his isolation, Celine tries to maintain constant contact with his French circle of friends among them, Dr. Augustine tuset figure around which revolves the arts of Quimper, \The period of exile Celine allows to reconnect with the world of replaying pre-war through the abundant lists sometimes unidentified names \And brothers jams, and their divine grandfather! And our so sweet crepe.

I should have not finished. \The different times of Celine's life intersect in correspondence denmark, giving the memory a role both harmful and saving for the author: \The atrocious is that I never forget anything. It would rather that I forget things ... Oh marie bell, my loves! It was really extraordinary in Armida!

Such things are not forgotten. Writing the letter marries the train of thought of the author, not using any transition between subjects: \I like it. This is a temperament and a whole treasure of Brittany.

How's the mother of Madeleine? We often talk about the \Their poor little pussy ... \like several other letters of the Danish correspondence, this letter is for two speakers: Dr.

Tuset but also the painter henri mahé, who also presented the first to Celine. The tone changes significantly when the writer, addressing his longtime friend, even nostalgia kindness to give vent to his anger: \Here begins the long and virulent narrative of a major turning of the epic denmark. Celine had before his exile, told of gold to the dancer Karen jensen dedicatee. Aided ella Johansen, the latter set of apartments available to Destouches who took refuge there with their respective outputs in prison. Depositories Gold Celine whose reserve decreases suspiciously, the two women are violently taken part here, \They literally tortured the poor lollipop.

His friend Johansen, drunk as hysterical, spiteful, envious, a monster. Celine will even compare to \The doubled anger Celine frustration spares no one, not even his own daughter, \an inexhaustible source of fury that inspired him as punchy lines as those that make his novels: \And with all the Protestant monstrous hypocrisy! Always superb alibi for the worst crimes, the most écurantes cowardice.

In the result, I was robbed of a few million, the most hypocritical of the world under blackmail, and nothing to say, absolutely nothing. \Aphorisms, especially in this letter, are the sign of the permanent fusion of style and writing epistolary \means.

Travel, dresses, alcohol, gambling, etc ... Redeems himself, it seems, by stirring a little to his friends. Then work at that time: \It has at least the great advantage of never being boring. \This letter of great density is a daily witness the stages of \We also note one of the first instances of milton hindus ot his opponents, armed with his usual sarcasm: \In short we have fun. It makes us happy to hear from you to make us a little hope and existence.