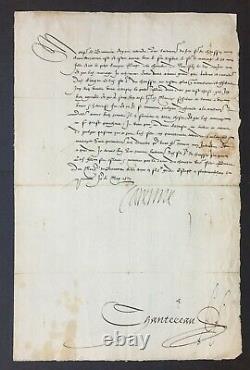 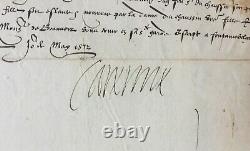 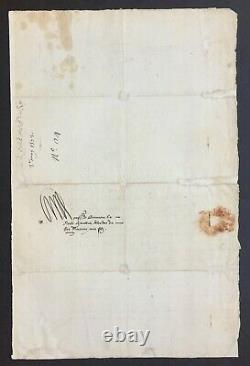 Catherine de medicis queen of France - letter signed to the king's chamberlain - Duke of Anjou. Through her marriage to Henri II, she became Duchess of Brittany from 1536 to 1547 and queen of France from 1547 to 1559. Mother of the Kings Of Francis II, Charles ix, Henry iii, Queen Elizabeth of Spain and Daisy (\"Queen Margot\"), she ruled France as queen mother and regent from 1560 to 1563.

Great figure of the 17th century and the kingdom of France torn by wars of religion and armed conflicts. Letter signed \"caterine\" addressed to the king's chamberlain \"Monseigneur de beauvoir la nocle [jean of the end, chamberlain and knight of the king's order], knight of the lord of the king Sir mon filz [charles ix],\" countersigned by chant, 1 p.

Address on the back, Fontainebleau, 3 May 1573 (8 days before the Duke Danjou, his son and future henri iii, was elected king of Poland). Beautiful letter in which catherine de medicis mentions his sons, all two kings of France, Charles ix and the Duke danjou, future henri iii, and where all his authority is expressed in the face of the chamberlain of charles ix in the France of the xvie.

The wedding was finally celebrated on July 28, 1573, on the express command of King Charles ix. François de seneret, knight of the order of the king, lord of chaussin. Claude du saix, squire, river lord, gentleman of the room serving the mouth of the Duke of Anjou, future henri iii, then captain of 50 men-at-arms and city governor. The item \"catherine of medicis queen de France letter signed to chamberlain henri iii\" is on sale since Sunday, January 3, 2021. It is in the category \"collections-letters, old papers-autographs-historical personalities\".

The seller is \"epistole\" and is located in bets. This item can be shipped to the following country: European Union.