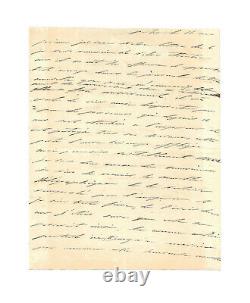 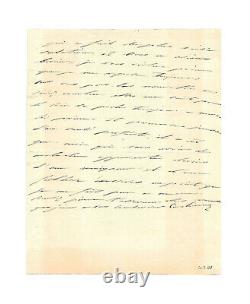 Autograph letter signed carolin to a prince [naples, May 15, 1813), 2 p. Grand in-8 letter slightly insolated in places. Rare autograph letter signed by caroline bonaparte, queen consort of naples by her marriage with joachim murat and small on napoleon 1. She felt deeply affected by the death of Marshal Bears, duke distria, but nevertheless rejoiced at the victory of his brother the emperor at the battle of Lützen 15 days earlier, the latter having succeeded the disastrous campaign of russia. I received your letter from the 6th. I thank you for your attention as it was terrible to suddenly learn in the newspaper the sad news that you are announcing, this death of Marshal Duc distrie. [jean-baptist bessier], it affects me excessively. It is cruel to see the people who have been attached to the emperor for 15 years gradually disappear and have shared all his memories, this loss left much distressed. I'm also so saddened.

I just received the new telegraph of the victory won by the emperor [bataille de lützen], and I am very proud to wash guessed because I was sure it would happen this way, the cannon fired everywhere here, and up to Messina to announce this happy news that made the most vivid sensation, and we needed it. I repeat to you, Prince, that I always rely on you for the news. You know how precise they are to me. The king is always in trouble [his husband joachim murat].

Princes and princesses [achille, letizia, lucian and pious] enjoy perfect health. It is only I who, without having any apparent disease, become dilute and overly weak to the point that I am afraid to see. Receive, Prince, the assurance of the senses.

[mentions] that I love to keep you. Brilliant cavalry officer, bushes stand out in most of the great battles of the Napoleonic wars, notably in austerlitz, eylau, essling and wagram. He was fatally wounded on the 1st. May 1813 in Rippach, on the eve of the Battle of Lützen. Bessières was, according to Napoleon, "a strong but cautious and cautious reserve officer.

" Poor commander-in-chief, however, he is an excellent cavalry general, courageous, capable of initiatives and who often leads in. No one charges his horsemen in front of the enemy.

He is also a cultured, pious and popular man in the custody. His death was strongly felt by the emperor, who said about him: "He lived as a bayard, he died as a turen". The battle of Lützen took place on 2 May 1813 when the Napoleonic army returned after the disaster of the russia campaign. Wittgenstein attacked a column of napoleon near lützen, in order to take over the town of leipzig. After a day of intense fighting, Prussian and Russian forces retreated. The item "caroline bonaparte / letter autograph signed / murat / napoleon / lutzen / 1813" is on sale since Wednesday 30 June 2021. It is in the category "collections\letters, old papers\autographs\others". The seller is "laurent-autographs" and is located at/in versailles. This item can be delivered anywhere in the world.