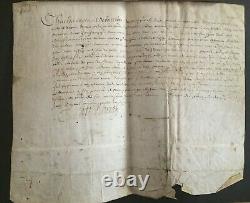 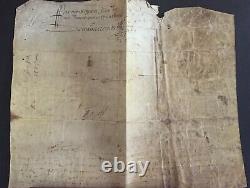 Charles x according to the league, cardinal of vendôme, blood prince of the bourbon house. An important figure in the wars of religion. In 1585, the Catholic league imposed it on King Henri iii as heir to the French crown in place of his nephew, who was protesting the future henry iv. During the general states of 1588 to blois, he was arrested on the orders of the king. On the death of the latter, while still sequestered, he was recognized by the leaguers as the only legitimate king of France.

It was proclaimed by the betting parliament as \"Charles x\" in 1589. Document signed \"c caral de bourbon,\" spur 2 June 1585; countersigned tomorrow on the retreat; oblong vellum in-4. Archbishop of Rouen and primate of Normandy, lord and count of the city of dieppe, he made it known that for the good, profit and increase of the income of his archbishop, \"both for us and for noz successors archevesques\", he yawned and abandoned as an irrevocable fiefdom to french the tellier \"said gradus mareschal\" remaining at the pollet \"a vuide place audit place of the pollet joining the haven of said dieppe\" Sending by registered mail. The item \"bourbon charles de, cardinal, document / letter signed 1585\" has been on sale since Saturday, November 21, 2020. It is in the category \"collections-letters, old papers-autographs-historical personalities\".