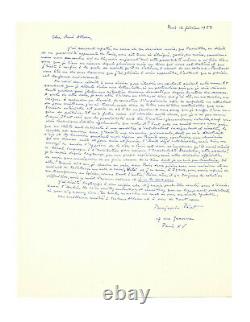 The surrealist poet makes a pathetic observation of his personal situation, until he evokes suicide. "all of this would still be nothing since these falls are inherent in my condition as an independent and revolted intellectual." "Dear Alleau, I have often regretted, in recent months, that verses despite its apparent proximity to bets, have kept us so far away. Once, at least, could we meet here or there; but today this very possibility has disappeared so well that I have kept in reserve a book for you for several months and that I hesitate to entrust to the post for fear that it will get worse, because of its volume. Yet you are one of the few men I am pleased to see appearing, especially since this pleasure is always rewarding.

So here I am reduced to writing to you to restore friendly contact between us. And yet I hate to write a letter.

This one in particular since I have to overcome all modesty to spread a situation that has become dramatic since the return of the holidays. From that date on, I went from failure to failure, so that in November I had to resign myself to looking for a job as a printer in order to survive until better days.

I found some, but under such material conditions my blood pressure increased from 16 to 21 in January. But you know I'm suffering from angina. I had to stop and look for something else I haven't found yet. It is true that the possibilities are very limited: banned journalism. Except for technical jobs, edition too, what remains? All of this would still be nothing since these falls are inherent in my condition as an independent and revolted intellectual, the peak occurred yesterday. I live in a tiny room, whose air and light have been taken away from me during my stay in Brazil to build a chimney that spills me night and day soot and smoke. It was already intolerable, but yesterday a messenger from the health department of the city of bets came to tell me that he considered this room unfit for housing for reasons of unsanitaryness. I've known this for a long time through my own experience, but this formal decision will result in me being driven out of this place of which I'm only a tenant.

For ten years, I've been looking in vain for two rooms with a kitchen and a toilet (or a bathroom), that's where I'm, at 59 years old, for refusing to turn me into a grocer, like so many others! Of course, there is always the definitive solution, but it would be to confess defeat, and I do not want it. I hesitated for a long time to entrust this to you and I might have retreated without the insistence of andre [breton]. Don't be angry with me and consider these lines to be non-existent if you can't help it.

Anyway, a word from you would be nice to me. My best regards to Madame Alleau and to you from every court. Freemason too, he had in his heart to follow a median path far removed from the excesses of Scientism as of occultism. He participated in the encyclopædia universalis and directed the collection of bibliotheca hermetica editions at denoël. This item is in the category "collections\letters, old papers\autographs\others".

The seller is "laurent-autographs" and is located in this country: fr.