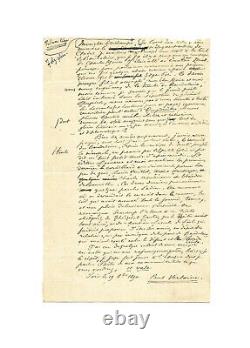 Autograph letter signed "paul verlaine" to leon deschamps for the review the betting pen, on October 19, 1890, 1 p. In-8 in black ink of a very tight writing on a sheet of English verged paper trace of old installation on tab on the reverse; attenuated fold; small lack at upper margin with reached to two letters. Famous and very moving letter published in the form of a "free gallery" in the pen of November 15, 1890, under the title of the funeral of baldelaire.

When I read in your last issue the so eloquent cladel article, I remembered a visit to the baudelaire grave that I made five years ago in the company of charles morice. I went to Montparnasse cemetery to wear a crown to a person who was something like maria clemns was in edgar poe. This almost filial duty accomplished, my dear morice and I, we inquired of the tomb of baldelaire; but, as I knew that the great poet was buried in the burial of General Aupick, we did not have to confront all the shameful (and shameful for a country) ignorances observed by the author of ombrailles, and we soon could melancholy and ratiocine before the petty stele under which so much literary glory sleeps - and moreover, if we will, military. many years before, I had accompanied, very young and obscure, the coffin of baldelaire, from the health home to the necropolis, passing through the very little church where a very small afternoon service was said.

The editor Lemerre and I walked first behind the hearse that followed among very few people, louis veuillot, arsène houssaye, charles asselineau and theodore de banville. The latter two delivered a few farewell words. As the coffin was being brought down into the vault, the sky that had threatened all day, thundered, and a diluvian rain followed. We noticed much the absence at these sad funerals, of the gautier theophile, whom the master had loved so much, and of m. Leconte de lisle who was a profession of being his friend, in spite of the relations, a little ironic on the part of Baudelaire, who had existed between the deceased and the Creole barde.

I thought of some interest in sending you these notes that hardly rejuvenate me, although, I repeat, I was very young at the time I was talking about. Make my communication whatever you want, and it's worth it.

Verlaine, then twenty-three years old, had in fact followed the funeral procession of Baudelaire on September 2, 1867. He recorded his first memories on September 7th in the artistic france.

Suscited by an article by léon cladel published on 15 October in the same magazine, this letter was repeated in the posthumous works of verlaine, published by Massin and appears in his complete prose works. Verlaine was the true initiator of the first poetic generation from the author of the flowers of evil, who had with rimbaud and mallarmé, his greatest successors. Verlain's admiration for baudelaire. In his collection of intimate liturgies (1892), verlaine published the sonnet "a charles baudelaire". In these verses there is an ambiguous relationship between the two poets. If verlaine has undeniably made baudelaire a true model, he disavows the part of his work that takes Christian morals counterstepped. Thus, although the first verses - "I didn't know you, I didn't love you, / I don't know you and I love you less" - of this poem may surprise, it would be a misinterpretation to deduce a rejection of baudelaire as a man. However, verlaine does not develop his relationship with baudelaire only under the prism of religion.

He devoted him an essay, published in 1913 in his posthumous works, vol. He then describes him as "the modern physical man, as the refinements of an excessive civilization have done [.] with its sharp and vibrant senses, its painfully subtle mind, its tobacco-saturated brain, its blood burned with alcohol." In this context, we identify the baudelaire of modernity, the decadent aesthet and the man of extraordinary sensitivity. The duplicity that we suggested may make us think of the famous verse of the poem that opens the flowers of evil, "to the reader": "hypocrite reader, - my similar, - my brother!

For if verlaine does not like the immoral being, let us not forget that he has his vices, and that they have helped to forge the ethos that we know him. Not very different from that of a baudelaire.

From then on, the expression "cursed poet", which was directly taken from the title of a verlaine's work, became so popularized that today it is used somewhat anachronically to qualify the "prince des nuées"! In fact, over time, the "heavy poet" has become the archetype of the inspired and misunderstood poet, who stands out by the rejection of morality and provocation.

Finally, this richer edmond analysis (verlaine, poetic works, bordas, 1967) enlightens us on the way verlaine envisages Baudelaire poetry: "The study that verlaine devoted to Baudelaire is far from being of first order. At least she shows us that in 1865 there was the merit of seeing the grandeur of baldelaire, and showing on this occasion more insight than the too wise saint-beauve. To tell the truth, he presents us with a very partial and truncated baudelaire, the one who wanted to separate poetry from morality in order to give it "no other purpose than herself" and who denounced the ease of romantic inspiration. Verlaine increased with great exclamation on these already somewhat worn-out themes; on the other hand, he persisted in seeing in the "dark satanism" of baudelaire only a "inoffensive and picturesque caprice of artist". In short, it mainly retains from baldelaire what goes in the direction of the parnassians.

It can hardly be but a mme marie maute, who died in 1884. References: the pen, 15 November 1890, p. 217 complete prose works, pleiade, p. This item is in the category "collections\letters, old papers\autographs\others". The seller is "laurent-autographs" and is located in this country: fr.