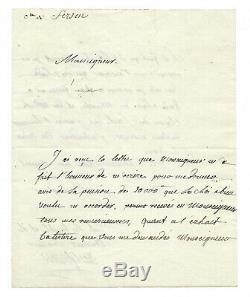 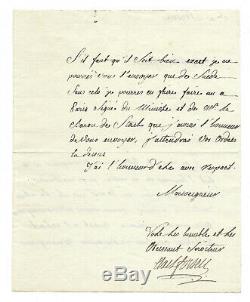 Extremely rare autograph letter signed by Count Axel fersen about a royal pension. I received the letter that Monsignor did me the honor to write to me to give me notice of the pension ii 20,000 that the king was willing to give me, sir recevés in my thanks, on the 'batistere extract you asked me sir if it must be very exact pourrés I send it to you as suede or I make a pourrés has signed paris Minister and mr Baron stael [responsible for business suede court in France] I have the honor of sending you, I await your orders the above. I have the honor to be with respect. Monseigneur the humbres and your obedient servant.

In June 1784 fersen returned to Versailles and attended a party given by Marie Antoinette on June 21 breakfast Trianon for gustave iii and its sequel. Iii Gustave, who gave the royal fersen-Swedish regiment will soon bestow a pension of 20,000 pounds. If the love fersen and Marie-Antoinette are doing to each other is no doubt, the eternal question remains whether they consumed.

This festival has also fueled the wildest rumors since the queen had given birth to a child nine months later. The item \The seller is \This article can be shipped worldwide.