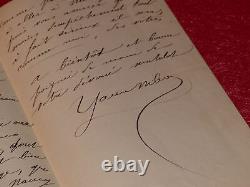 Autograph letter - sailor - French songwriter xix/xxe. 1 letter on white paper. Count on xanrof, it is very happy to know that we are only both as master-chansoners to go to nancy... See you soon and good handshake of your devoted sailor... Of his real name albert robin.

Essential witness of the artistic life of his time so much on the ships of the navy. That bets in artistic circles frequented by sarah bernhardt, robert de montesquiou or marcel proust.

The extent of his talent was so great that he was able to tell the chronicles of malouin life in local newspapers, to write and compose songs of sailors, to perform them both in the Parisian salons as well as on board the naval buildings... Yann nibor and the Breton betting bards.

[source website: The History Hunter - 2015]. In the cabarets of Montmartre, around 1890, many artists played the map of regional folklore. And the Bretons have a nice part!

Published four years ago, the novel "Island Fishermen" of stone loti. Inspires many works including one of the first tubes: "la paimpolaise" by thedore botrel. The narrative of this senseless struggle against the elements has long marked the collective imagination. Then carried by the romantic movement. The Breton has the reputation of being brave, devoted; a little naive.

Although originally from the Gallo Bretagne, botrel appeared in public only in traditional Finistrian costume. Living long-time betting and singing almost exclusively in French, theodore botrel is undoubtedly the most "fabricated" artist of the time. Despite the openly folkloric character of his character, he is not entirely inspired by true traditional songs and "manufactures" a repertory unrelated to real history, which he will be accused of for a long time. On the other hand, we are interested here in a less well-known character but a bit more authentic.

Yann nibor was born albert robin in Saint Malo in 1857, his father was a former Newfoundlander who became a marine carpenter. When the 1870 war broke out, the very young robin entered the navy as a moss. After a long apprenticeship, he enlisted for 5 years as a second-class rifleman.

During his service on board the ocean and the magician, he began to show his talents as a singer. Far from botrel's blue flower romanticism, the poems of Yann nibor tell life in detail.

And the misery of those "damnes of the sea." One day in 1889, learning of the shipwreck of two Malouin ships off the coast of Canada, he wrote a complaint in memory of the 179 sailors who had disappeared.

The same evening he presented her to the "golden sun" cabaret of Montmartre. All bets are rushing to listen to him. Alphonse daudet cannot help but crush a tear listening to "the four brothers and theella", whose words are these. On the quat'-frèr' and su' l'ella, (bis).

All healthy, valiant and beautiful goods. To go to the new ground, to the bench. Fishing for cod and cap'lan. But we'll never see them again.

The bastards are pretty lost. Those who are the most unhappy. It's the marmalades, the widows, the old ones. Because this winter will be no bread. And more than one will starve. But there are some who will enjoy it. It's the fish that'll eat them. Let's go pell' pile and terr'neuvas. You don't have to make a ball for that.

You gotta drink to the guys' health. They're sunk, deep down, piled up. Because like the quat'frèr and the ella. You can't wait to get through that.

The style is popular, lapidary, satyric, almost humorous. Yann nibor becomes "the poet of the sailors". And chain the tours through the france. During a visit to Bretagne in 1903, it is quite naturally that he organizes a concert for the benefit of the fishermen of Comaret.

He recorded some songs and performed official ceremonies as a marine bard and returned to popular success in the 1920s. In 1938, 81 years old, he followed his children to the chapel on erdre, close to Nantes. He moved to 9 rue de l'erdre, close to the town and spent the last years of his life singing at local events. 1 sheet of paper, folded in its center forming 4pp. [Georgian origin or louis boulay].

This item is in the category "collections\letters, old papers\autographs\historical persons". The seller is "amideslivres" and is located in this country: fr.