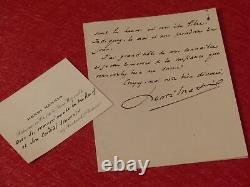 Autograph letter - French journalist & politician xix/xxe. Header letter from the universal journal. Your letter causes me a sincere remorse; you had already written to me and I had not answered you.

It's because I'm overwhelmed with occupation and devoured by work. My whole life is scattered and lost... Armchair 32 of the French Academy. Writer, opinion journalist, literary critic, literary historian. Henri Massis, born on 21 March 1886 in the 18th arrondissement of Paris and died on 16 April 1970.

In the 14th arrondissement, is a literary critic, political essayist and literary historian. He created magazines like gold reed and the universal magazine he set up with his friend. Jacques bainville, and is known for his participation in the French action. He holds positions in the administration of vichy but, not part of the ultras. From collaboration, he is little worried about liberation. He was elected to the French Academy in 1960.

An intellectual of the Maurassian Catholic right. A student of alain at the lycée condorcet, henri massis continues in letters to the sorbonne a degree in philosophy. That he got in 1908.

During his studies, he published his first book of literary criticism, how émile zola composed his novels then noticed by émile faguet as a promising beginning. Politically, the young massis was then barrisian. Massis was very soon attracted to charles Maurras and the French action. Fervent polemist, he rejects the spread of German culture to the sorbonne and the decline of the classical culture (survey with alfred late under the pseudonym of agathon). A second "agathon" followed in 1913.

"the young people of today" whose taste of action he applauds, patriotic faith. Catholic revival and political realism. During the 1920s, Massis renewed this type of criticism about the writers of his time.

Like andré gide or roman ralland. At first he reproaches, in particular, his "satanic" customs and his attacks on the family institution (terrestrial foods); he denounces the socialist inclination of the second and sees in him a traitor who pacts with "the enemy". Massis has devoted much of his time to journalism. He made his first appearance at the polls before he was a writer.

To counterfire the condemnation of italia by the society of nations in 1935 after the invasion. Ethiopia, massis, a supporter of an agreement with the fascist regime of mussolini, is the spokesman of a certain right when he writes the manifesto of the French intellectuals for the defence of the West and peace in Europe. Together with his friend robert brasillach, he published a book to the glory of Francoism: the cadets of the alcazar.

In 1938, he visited the portugal and expressed his support for the Salazar dictator. As with his colleagues in the French action, the Germanophobia of massis made him. To condemn - logically - the Hitlerian regime leaders, 1939; consisting of three political dialogues. With franco, salazar and mussolini. Facing the nrf, henri massis tries to set up with Maritan jacques.

A kind of Catholic nrf with the gold reed collection published at plon. I'm a businessman and a petainist under occupation. Staff officer of General Charles Huntziger during the "funny war", he was, after the armistice, briefly in charge of mission to the general staff of the maxim weygand - he won a second cross of war there - then in the cabinet of the minister of veterans and family jean ybarnegaray: he then asserted that he wanted to "fulfill an opening of recovery" for the youth, but avoiding "anything that might seem to be copied": no import of faith, patriotism. No ideal coming from beyond our borders, especially!

The universal magazine that he led settled in Vichy and defended the vichy regime and its national revolution there. He gave lectures, literary or more political as in 1943 at Lyon a conference on Russia and the West, under the auspices of the Ministry of Information and the committee of the exhibition "Bolshevism against Europe".

Massis was appointed in 1941 as a member of the National Council set up by vichy (he was a member of his Commission for the Constitution in 1941 and of his Commission for Youth Studies in 1942), a member in 1943 of the Higher Council for Compulsory Labour and Youth Constructions chaired by abel bonard. As a member of the Secretariat for the Youth of George Lamirand, he successfully opposed the establishment of a "single youth" organisation intended by the collaborationists. He is subject to one month of administrative detention upon release.

His name appears on the list of undesirable writers drawn up by the National Committee of Writers in 1944. Nor is there any concern at the time of purification. After the Second World War, ruined, henri massis, his grabatary wife, survived Saint-germain-des-pres thanks to a very modest job of reader at plon.

In particular, he devoted himself to biographical studies, including renan, barres, proust and salazar. Candidate declared in 1955, he was elected on 19 May 1960 as a member of the French Academy and, thanks to the charitable support of François Mauriac, received in June 1961. Massis is then a member of the patronage committee of a Parisian political-literary circle born in 1948 around the bookshop of the French friendships of the doctor Louis Rousseau, the circle of French friendships, alongside academicians (henry bordeaux, jérôme carcopino, daniel-rops, antoine de lévis-mirepoix, maurice genevoix), intellectuals like daniel halevy or gabriel marcel, edmond michelet. From mgr rupp, from pastor marc boegner. Massis is president of an association founded in 1951, Franco-Spanish friendships, with.

As vice-presidents gustave thibon and the royalist banker marcel wiriath and as honorary president the general and academic maxim weygand. Russelau is on his committee. The circle of French friendships gave a dinner in his honour for his election to the academy in December 1960, in which the admiral moreau, French pietri, the Duke of Castries, the Duke joseph pozzo di Borgo, rene gillouin, andré therive, louis salleron, jacques herissay, president of the association of Catholic writers took part. He was elected president of this circle in March 1962, with as vice-presidents Gilbert Tournier and masquerade stone.

He frequents another association, the union of independent intellectuals. He remained faithful to the "integral nationalism" of the French action; he participated, in favour of charles Maurras imprisoned, in a meeting organized by aspects of the france in December 1949, with boutonang stone.

Gabriel marcel, daniel halévy, colonel remy, watches the remains of Maurras in 1952, collaborates in aspects of france in the 1950s and 1960s and to the French nation, takes part in the annual banquet of national restoration (france), agrees to sponsor the center of national studies in 1962, which intends to "teach the masters of French nationalism and of the Christian order". He remains faithful also to the Petain Marshal. Member of the honorary committee of the association for. Defending the memory of Marshal Pétain at his foundation in 1951, he willingly participated in his meetings and mass anniversaries.

He defended the thesis of the "bouclier" according to which the Petain Marshal had protected the French by opposing German demands. He was one of the most faithful academicians in the 1960s. And was appointed a statutory honorary member in 1967.

The Catholic traditionalist itineraries magazine, in which he collaborated, published a special issue in his honour in 1961. He presided over the congress of the Catholic city of the counter-revolutionary jean ouset in 1960. During the polemics that opposed the Catholic city to its detractors in the early 1960s, Massis, as well as weygand, the Alphonse Marshal June, the Remy Colonel, Gustave Thibon, Michel of St. Gilbert tournier and others signed a collective declaration in his favour in 1962.

During the war of Algeria, he signed the manifesto of the French intellectuals for resistance. To the abandonment of October 1960 in reaction to the manifesto of 121. Date of last issue 1944. And henri massis (chief editor), following the publication of the manifesto "for a party of intelligence" in the figaro of 19 July 1919.

The program of the magazine was: "to bring together everything in the world that takes sides against destruction, to strengthen and expand relations among groups devoted to the cause of the spirit." It was a nationalist magazine (royalist and catholic) whose editorial line was close to that of the French action, including charles benoist, marie de roux, robert havard de la montagne, rené johannet, georges valois, firmin bacconnier, pierre-antoine Cousteau, georges Gaudy, goustave thibon, pierre gaxotte, claude roy, gonzague de reynold, then after 1941, pierre boutang and raoul girardet. The universal journal was particularly interested in foreign policy. In addition to its two founders, the magazine had as its main collaborators. Jacques maritan, in charge of the philosophical section (early 1920s).

Charles Maurras, a vaussard maurice and a guerious henri. Sections dedicated to art, literature and philosophy written by léon daudet, thierry maulnier. André Rousseaux and robert brasillach, have always been remarkable according to eugen weber, historian. The political articles reflect the French policy of action. During the 1930s, the universal journal showed some support for authoritarian regimes, particularly in salazar (especially under the guise of massis). In 1930, on the other hand, in the wake of French action, it conducted a permanent campaign against German rearmament, the renaissance of Germanism and the emergence of Nazism.

It is one of the first important publications to have denounced from the outset. The threats of Hitlerism and the unpreparation of democracies in the face of an inevitable conflict with Germany.

After the death of Bathville (1936), it was placed in an increasingly narrow intellectual dependence. With the French action, and relaying the campaigns of the royalist movement in favor of the preventive occupation of the Rhineland, of the alliance with the fascist italy and of a continuous policy of rearmament. Strongly shaken by the French defeat, she settled in Vichy from 1940, supported Pétain, and opposed both resistance and collaborationism; she aligned herself with the positions of the vichy regime.

1 sheet of white paper, folded in its center forming 4pp. Paris, no date around 1928. [Georgian origin or louis boulay]. This item is in the category "collections\letters, old papers\autographs\historical persons". The seller is "amideslivres" and is located in this country: fr.