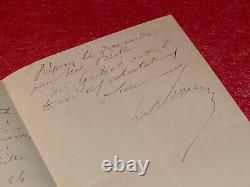 [Autograph letter - mathematician - astronomy xix/xxe]. Letter signed from Urban the glassmaker. Give those of our officials who will come to work everything they will ask you, so much for the others..

prepare the request for m. Mr gaillot has found the calculators - thank you. Gaillot referred to at the end of the letter is.

Jean Baptiste amiable gaillot (27 April 1834 - 4 June 1921), known as a kind gaillot. Is a French astronomer who worked at the Paris Observatory from 1861 to 1903. He was recruited by urban glassmaker in 1861 and spent his entire career in the office of calculations. It is known for finalizing the analytical theories of the glassmaker on the movement of Jupiter, Saturn, Uranus and Neptune and for the publication of the catalogue of the betting observatory, a huge compilation of observations of astronomical transits from 1837 to 1881.

Gold medal of the Royal Astronomic Society (1876). Urbain le Verrier, born in Saint-Lô on 11 March 1811, died in Paris on 23 September 1877, is a French astronomer and mathematician specializing in celestial mechanics, discoverer of the Neptune planet and founder of modern French meteorology. Urban jean josep the glassmaker was born into a modest bourgeois family, of a father. Louis-baptist the glassmaker, "supernumerary in the administration of the domains" and of marie-jeanne-josephine-pauline de Baudre. After eight years of studies at the municipal college of his native city Saint-Lô, he entered the Royal College of Caen where he studied mathematics from 1827 to 1830.

His father, who believed in his future in science, enrolled him in the Mayer institution run by the chock mathematician and sold his house to support the cost of this preparatory school. He continued his studies at the Collège Louis-le-grand à paris and was admitted in 1831 to the Polytechnic School from which he graduated two years later as an engineer in tobacco administration. He resigned in 1835 to devote himself to a scientific career. He first worked in the gay-lussac chemistry laboratory and became a repeater in mathematics and a teacher at the stanislas college.

In 1837 he asked for the place of repeater of chemistry at the polytechnic school, but it was attributed. On the other hand, he was offered a place as a repeater of "geodesy, astronomy and machines", which he accepted and specialized in position astronomy and celestial mechanics. In the same year, he married lucile marie clotilde choquet (daughter of his former teacher), with whom he had three children. In 1839, he presented to the Academy of Sciences his first memory on the centuries-old variations of planet orbits (notably duranus, alexis bouvard unable to solve the problem of anomalies on this planet).

It is in this memory that we find the first description. Urban the glassmaker becomes a member of the astronomy section of the Academy of Sciences. January 19, 1846, and October 14, 1846, of the same year, an assistant member of the Longitudes Bureau.

Urbain the glassmaker became famous when the planet whose characteristics he calculated as a hypothetical cause of the anomalies of uranus movements, was actually observed by the German astronomer johann galle at the Berlin Observatory on September 23, 1846. This new planet will be called neptune, despite the proposal by François arago, under the blackmail of the glassmaker (a rumor claims that arago has an affair with the glassmaker), which was made to baptize it with the academy of sciences. While the English offer Janus or Oceanus. The planet uranus, discovered by william herschel in 1781, had indeed irregularities in relation to the orbit that it should have had according to the law of the universal gravitation of isaac newton.

Encouraged by françois arago, the glassmaker began in 1844 to calculate the characteristics of this new planet (mass, orbit, current position), whose results he would communicate to the Academy of Sciences on August 31, 1846. They will be confirmed (nearly) by johann galle, who observed the new star on the same day that he received his position by the glassmaker in mail. In front of the Academy of Sciences, arago will pronounce the famous sentence: "m.

The glassmaker saw the new star at the end of his pen". The royal society awarded him the copley medal the same year with praise "one of the greatest triumphs of modern analysis applied to the theory of gravity".

This discovery will be the subject of many polemics at the time, since these calculations were carried out at the same time by john couch adams, but without any of them knowing the work of the other. The characteristics of the planet had been determined by adams a year earlier but had not been published. In 1846, a chair of celestial mechanics was created to glaze it at the faculty of betting sciences. Pierre-Ossian bonnet succeeded him in 1878.

These predictions will prove to be inaccurate, and these anomalies will be explained half a century later. By Albert einstein with the theory of general relativity. Director of the Paris Observatory. On 30 January 1854, the glassmaker was appointed director of the betting observatory, succeeding françois arago and taking the foothold of his predecessor's policy. In particular, he demolished his apartments, which were built by the latter, and undertook a total reorganization. That he will not be able to complete because of lack of appropriations: a division that is highly hierarchical. Work (observers are paid 15 cents to the star observed, worker monitoring). Applying the English model of the industrial revolution to the field of astronomy. It will have a catalogue of 306 fundamental stars. But he shows himself there. That, following several petitions and resignation.

From about sixty astronomers of the Paris Observatory, and despite his political affiliation, he was relieved of his duties in 1870 by imperial decree. He resigned at the same time from the general council of the handle, then from the bureau of longitudes. He later led a career as a scientific journalist and in 1873 resumed the position of director of the observatory after the accidental death of his successor, charles-eugéne delaunay. And this until his death. Urbain the glassmaker died on 23 September 1877 at the observatory's premises.

Cross the Europe from west to east, causing the loss of 41 ships in the Black Sea. The glassmaker and emmanuel liais, his deputy director, then undertook, at the request of napoleon iii, to set up a network of meteorological observatories on French territory, intended primarily for sailors. To warn them of the arrival of storms. This network consists of 24 stations, 13 of which are connected by telegraph, and will then extend to 59 observatories spread over the whole of Europe in 1865: as early as 1863, the first weather forecast (forecast at 24 hours thanks to daily weather maps and bulletins) for the port of Hamburg was made. This is the birth of modern meteorology.

At the head of a commission which bore his name, he reformed the teaching of the polytechnic school. By introducing more applied science.

At the same time, he also leads a political life. In 1848, during the days of June, while he served in. The National Guard, he engages to the right when he realizes the threat of what he calls the "red peril". On 13 May 1849 he was elected a member of the House of Assembly under the label of the friends of the order.

He supported the policy of bonaparte louis-napoléon and his coup d'état of December 2, 1851: a few weeks later, he was appointed senator. Inspector General of Higher Education for Science on 9 March 1852.

In particular, he is preparing the reform of the "fork of studies" with the minister of hippolyte education fortoul (scientific section separate from the literary section from the fourth class). At his death he was replaced in these functions by hervé faye. In 1852, he was elected general councillor of the canton of Saint-Malo-de-la-lande.

He remained elected from this canton until 1870 and would preside over the general council of the round from 1858 to 1870. He is buried in the Montparnasse cemetery. Although suffering from a painful and painful illness, he dedicates the end of his life to the completion of his work on the movement of the planets. He proposed a downward revision of the sun's distance and the speed of light. The Royal Astronomic Society awarded him the medal of honour in 1876 for his memoirs on the gas planets Jupiter, Saturn, Uranus and Neptune.

It is in the category "collections\letters, old papers\autographs\historical persons". The seller is "amideslivres" and is located in/in castany under wood. This item can be delivered anywhere in the world.