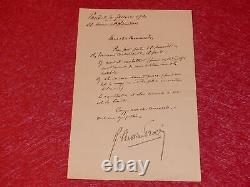 [sign autograph letter - French literature xxe - ww1]. My dear comrade; to be part of the association. Warrior writers, we have to. 2-to be a pre-war writer... An association of war writers.

Christian reborn stone, reborn Christian-frogé, is a French poet and writer. Born on 17 April 1880 in vernoil-le-fourrier, near Saumur, and died on 9 March 1958 in Boissy-la-Rivière. He is part of the action group of wolf art initiated by anatole belval-delahaye. During a literary meeting of this group, a scream-aux-loups, on January 21, 1910, took place a warm-up between him and gabriel-tristan Franconi, who would go to court on May 19, 1911 for beatings and wounding the person of frogé. The French academy awarded him the jules-davaine prize in 1916, the Montyon prize in 1917.

And the healing marcelin prize in 1923. In February 1919, he participated in the founding of the Association of Combating Writers. Of which he becomes the secretary general.

The Froged Case, New Latin Editions (1919). The great war, lived, told, illustrated by the fighters (two volumes), ed. Quillet (1922), guerrilla marcelin's prize from the French academy in 1923. La croix de guerre, bookshop of france (1936). The Association of Combating Writers. To make the memory of the 560 writers who died for France during the first world conflict shine out, to defend the interests of the surviving writers as well as the French language. The Association of Combating Writers (Aec) is an association founded, among other things, by the German joseum in the aftermath of the First World War. It aims to defend the interests of surviving writers and the memory of those who have fallen into the field of honour.

The association was founded on June 27, 1919 by Jose germain and a group of 80 surviving writers. From the great war (including roland dorgeles, maurice genevoix, mac orlan stone, emile henriot, jérôme and jean tharaud). The demobilized writers can then continue the publication of the writer's bulletin, a monthly publication created by three journalists of the intransigent at the end of 1914. On October 15, 1927, gaston doumergue, president of the French Republic, inaugurated marble tables in the pantheon. Named after 560 writers who died in the First World War.

On July 2, 1949, 197 names of writers who died during the Second World War were added. In the presence of the President of the Auriol vincent republic. Among his honorary presidents were Maurice Genevoix and Winston Churchill, and among his winners: Louis Weiss, Father Brücberger, Professor Jean Bernard, Paul Guth, Maurice Schumann, and Stone Messmer. In 1997, the association decided to expand its circle of adherents, opening up to writers who had not been combatants but shared patriotic values. Between 1924 and 1926, the association published an anthology in five volumes, tracing the literary and military service records of the 560 writers who died for France.

In 1960, she published a new anthology, prefaced by the Marshal June, of the 197 writers who died for France as part of the second world conflict. The association publishes, two to three times a year, a newsletter, writers fighting, gazette of the association.

In particular, this bulletin reports on the publications of its members. The aec operates a library installed since March 2009 in rueil-malmaison, in a room of the municipal cultural centre.

In 2018, the aec published a book entitled Writers in the Great War, paying tribute to the "560". The association is also responsible for the award of several literary prizes, bearing in particular the names of several of its former presidents (roland dorgeles, or michel tauriac). Literary awards are presented on the occasion of the association's general meeting.

In 2019, the association changed its prices, all now staffed. The six annual literary awards of the Association of Combating Writers are as follows. "Roland dorgelès" prize, created in 1995 for professional journalists in the print and audiovisual press "who have distinguished themselves particularly in the proper use of the French language". "Captain thomas Gauvin" prize, created in 2016 for "an author in service in the French armies, a book, a study or a memoir published in French, devoted to the conditions of military engagement of the French forces.

Prize "Jules michelet", created in 2019, rewarding a history book. In 1930, floods ravaged much of the southwestern part of the france, among other things.

Deforestation is being called into question and replanting is being sought by the public authorities. The association of war writers, then chaired by Farrère claude, decided in 1931 to participate in this movement by creating the forest of war writers, planted with pines and cedars on 135 hectares. The forest was planted in the mountainous massif of the Caroux-espinous, on the territory of the communes of combes and roses (herault).

It is located within the perimeter of the High-Languedoc Regional Natural Park. Some forest alleys are named unknown authors. Roland dorgeles wrote that it had seemed "just to honor the young, the unknown, the beginners, who left, to survive, only a few scattered pages: those I once said that they poured little ink, but all their blood". The names of writers who died during the Second World War were added in 1952.

Two women are among the 65 writers who gave their names to forest alleys, marietta martin and irene nemirovsky. On July 13, 1952, chalon stone, then president of the association of war writers, handed over the property of the forest to the state. It becomes a state forest and is set up as a walking site.

Afternoon of the fighting book. In the inter-war period, from 1925 onwards, the association organized an annual charity sale for its four relief funds.

This sale quickly became a worldly manifestation, during which writers such as geo-london, roland-dorgeles, germain josé, abel bonnard, henry bordeaux, jean cocteau, henri troyat or françois Mauriac dedicated their books that sold stars of the scene or screen such as spring yvonne, balin mireille, danielle darrieux, suzy solidor or gaby morlay, or women of the world. The President of the Republic came to inaugurate this event every year as early as 1926. The afternoon of the combatant book is, since then, organized annually, usually in November, continuously, in a large Parisian place. On May 6, 1932, came to inaugurate the annual exhibition of the association of warring writers.

The president of the French Republic, paul doumer, is assassinated by a Russian immigrant, paul gorgulov. The head of state was a fervent supporter of the cause of veterans, having lost four of his sons. Because of the First World War.

1 sheet of white paper, folded in its center forming 4pp. [Georgian origin or louis boulay]. This item is in the category "collections\letters, old papers\autographs\historical persons".