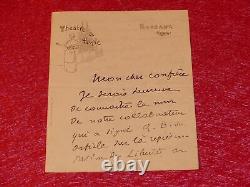 At the head of the people's theater, bussang-vosges, illustrated with a small composition showing one. Woman standing on a tree background, in the "art-nouveau" style. My dear colleague, I will be happy to know the name of your collaborator who signed g.

He also wrote some books under the pseudonym of martin petitclerc. Marie benjamin xavier "maurice" pottecher is the second son of a family of industrialists. Operator of a factory of brilliance and cutlery, prosperous activity but not suitable for young man.

He then wrote for the theatre, employing as actors the workers of the factory then. It is the creation of an amateur theatre, intended for the local public. A writer and poet, he wrote social plays for the people's theatre he founded in Bussang.

In 1895 and still existing. Nicknamed "the padre" (a nickname attributed to him by richard-willm stone). He is buried alongside his companion in the theatre park. Officer of the Legion of Honour (Decree of 21 January 1936). His insignia were given to him by georges duhamel of the French academy.

He is the paternal uncle of frederic pottecher, journalist and judicial columnist. Morteville, drama in three acts, l.

Village comedy in 3 acts, paul ollendorff, 1901 the passion of jeanne d'arc, drama in 5 acts, society of literary and artistic editions, 1904 the violating queen, tragedy in 3 acts, p. Stock, 1906 Molière and his wife, comedy in one act, in verse, p. Stock, 1909 words of a father, bookshop of annals, 1910 the mystery of judas iscariote, in iv acts and a prologue, p.

Stock, 1911 the theatre of the people of bussang (vosges), its origin, its development. And his goal exhibited by his founder, p.

The theatre has been classified as historical monuments since 2 August 1976 (extended in 2015). It is still active and offers several new creations each season.

Performances take place between May and December, with a majority of performances. Taking place for spring/summer programming in July and August.

In 1895, maurice pottecher, created. An outdoor scene on the mountainside. The spectators were standing in the meadow. The following year, the stage 14 meters open. 10 meters deep and 10 meters high is covered, then maurice pottecher.

Open the stage floor to nature. Thanks to two large sliding doors in order to "clean up the art in contact with it. Wooden benches are built to accommodate 2,000 spectators.

Electricity was installed in 1904, and in 1921 a closed room on the sides was built for spectators who could hold a little more. 1,000 seats; the public was finally sheltered by a roof in 1924. Lodges were installed in 1945, sewing workshops in 1950, the decor construction workshop in 1986. In 1994, the initial entrance to the theatre was rebuilt.

This place was directed during the 1950s (from 1936) by richard-willm stone. A well-known cinema actor, but also a complete artist: pianist, decorator and theatre director, one of which was performed each year in the theatre of the people, including the last play by maurice pottecher, the emperor of the sunset. The professional actors who came to play in bussang were not paid, but lived in community during the month of rehearsal and the month of performance, all meals being taken in common, with richard-willm stone itself; the atmosphere was quite friendly and even fraternal. In 1976, it was the grandson of maurice pottecher, chan stone, who took over.

He entrusted the theatre to the People's Theatre Association, whose president he would remain until his death in 2004. In 2015, the people's theatre celebrates its 120 years of existence. The People's Theatre is a building built entirely of wood that can accommodate up to 900 people.

The vault forms a real ship returned. The background opens onto the Vosges forest. This atmosphere gives a certain conviviality to the theatre where one meets a diverse audience. On the other hand, during nocturnal representations, the temperature can go down especially low: it is not uncommon to meet regulars equipped with downs. For this reason, the theatre traditionally did not offer performances in winter.

This cold stress was used for the first time in January 2007, where it was offered to the spectators, invited to come warmly dressed, a room with a chilly atmosphere. 1 sheet of white paper illustrated, folded into its center forming 4pp.

(folded: about 13.5x10.5cm). [Georgian origin or louis boulay]. This item is in the category "collections\letters, old papers\autographs\historical persons". The seller is "amideslivres" and is located in this country: fr.