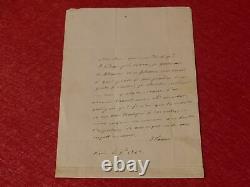 [Autograph letter - doctor xix/xxe]. Moving letter, from a man always filled with compassion for men and animals. Here struck cruelly by the misfortune of the loss of his daughter.

If I were near you, I would keep silent; and this silence would tell you how deeply I am in such a cruel loss! I seek some way around me to soften its bitterness; ah, my God! I have only the will...

Étienne pariset, born on August 5, 1770 at large and died on July 3, 1847 at bets. Is a French doctor, known to be the founder of the animal protection society. A doctor at the hospital of the saltpêtrière, he was a perpetual secretary of the medical academy. Son of Vosges artisans, his father was a nailmaker and his mother was door-to-door.

To deliver the orders, pariset travels his first years without receiving any education in a bereous family. His paternal uncle, French pariset, established wigker-perfumer in Nantes, proposed to welcome the child, both to relieve the burdens of the family, which had three children, and to give him proper instruction; moreover, he wished to make him his successor. He moved at the age of six and shortly after his arrival he was placed in a private school where he learned to read and count. At the age of 11, his uncle took him out of school and took him to his shop as an apprentice perfumer. And gradually taught him the rudiments of the profession; one day the young eldest found some leaves. From a book, which was nothing other than a musical that he devoured with greed: taken of passion for it. Literary, he got along with one of his comrades, cleric in a parish, who was able to provide him. A number of works of bossuet, fenelon or pascal. François pariset understood that he would not make his nephew a wig and that he wished to continue his education: he sent the child to an institution run by the Oratorians where he made rapid and continuous progress, especially in Greek and Latin. He made his rhetoric with josep frantic who, in 1789, was prefect of the studies of this institution before becoming a Member of Parliament and a member of the national convention. In 1792 he was requisitioned and sent to the northern army as a lieutenant, but he obtained his demobilization the following year and returned to Nantes; frédéric dubois reported that Parist later wrote. "If I ever go on a swim trip, I will go see all the corners of my poor uncle's house, the backyard where I suffered so much, the little courtyard where I discovered molare, the corridors where I opened and the bedroom of the second where I laughed so much with voltaire and the fountain. After his return to Nantes, the insurrection of sales broke out and, according to some historiographers, Parist would have embraced the cause of the "whites": for eighteen months he would have fought as a simple soldier in the ranks of the vendeans and would have done his best to heal his wounded comrades; it is said that he wrote the petition written by the widow of the Salesian general charles artus de bonchamps and who motivated the clemency of the representative of the people and saved the life of the noble lady. When the convention established health schools in Paris, Montpellier and Strasbourg, each department was to direct a student to the central school of betting who took the title of "student of the homeland".

And it was pariset that was sent by the city of Nantes with a state pension which was, in fact, not. After a few months of hard work and many days without bread.

Parisand obtained, thanks to the support of a friend, honorable jean riuffe, the place of tutor of two children. From a large Parisian family in which he found a second family and with whom he stayed eight years. Until the two teenagers died. He then resumed his medical studies, while continuing to do so. Passionate for literature and, at this time, he composed a tragedy, inspired by the sophocle theatre: electrifying, which he regarded as a masterful work and which he vainly tried to do.

Representing in a Parisian theatre. It was also at that time that he was received in the Catherine Helvetius salon at the society of auteuil, where he met many literators and scholars, such as Cabanis, Richerand or Alibert: Parist was noticed by his eloquence and originality of his opinions; it was thanks to his relations and more particularly to the protection of Cabanis that he was later able to enter the Parisian hospitals. He was appointed to the council of public health and health in 1810. He was also a free-mason, a member of the lodge of peace and union of women, he appears as a master on the table of the members of this lodge erected on the 29th messidor year, and his name is found on the table.

From this lodge until 1813. Having married, Parist felt the need to complete his medical studies and he supported his doctoral thesis. The 13 thormidor of the year xiii, with the subject "dissertation on uterine haemorrhage". Despite the birth of a girl and the obligation to provide household subsidies, he never resolved to develop a patientel; on the other hand, he was valued by articles in various medical publications as well as by the content of courses and lectures on anatomy and physiology. In 1813 he produced a Latin-French translation of the "aphorisms" of hippocrats.

It was the restoration that finally fixed the fate; on the proposal of the minister jacques claude beugnot, in May 1814, Parist was appointed to give care to the poor of the hospice of the bicêtre hospital and by a decree of 22 July 1819, the council of hospices decided that he would be in charge of the service of the alienated of the same establishment, following the death of French hebréard: it was an important service and that it was there that he could collect a large number of observations that allowed him to write several pages on mental alienation. On its causes and its various forms, but the proposed book never appeared in bookstores. He was also appointed in 1819 as a member of the " commission for the improvement of the fate of the alienated" where he sat in the company of jean-étienne esquirol, philippe pinel and antoine-athanase royer-collar. In October 1819, the Duke decazes, then minister of the interior, proposed to Parist a mission to cadiz. To observe yellow fever: the aim was to study the mode of invasion and spread of the scourge on the spot and to propose health measures to combat the epidemic.

He left with one of his students at the beginning of November 1819 and the mission lasted four months: Parist concluded with the transmission of man to man and imagined the setting up of sanitary cords and quarantines. Convinced that yellow fever was transmitted by contagion, Parist asked for the establishment of quarantines with implantation of the lazaret and he had the law of 3 March 1822 on the animal health. First legislative text on this issue.

Although righteous, the betting ideas on contagiosity earned him many enmities and his statement. "denying the contagion is denying God" was strongly fought in medical publications. And even at the academy. The government rewarded the dedication of Parish: it was decorated with the necklace of the order of Saint-Michel, of the order of charles iii of spain, and made knight of the legion of honor. (he will be promoted to the rank of officer upon his return from Egypt).

He was appointed a member of the Conseil supérieur de la santé, a perpetual secretary of the Royal Academy of Medicine, and in June 1826 he became chief physician of the saltpêtrière. The government granted him a living pension of 2,000 francs. His work on infectious diseases had him retained for a long-lasting Egyptian mission. 1828 - 10 May 1830): he did research on the plague, affirmed the transmission of this disease by contagion and proclaimed the need to disinfect contaminated effects and goods.

Paris and visited most of the cities of the Nile Delta and met Jean-Francois Champollion on several occasions on an archaeological mission. Several betting biographers report that the luxor obelisk of the square of the betting concord would have been offered, to the france, by the pacha mehemet ali, to thank pariset for having intervened, during a dinner also attended by champollion, to rescue his son. Ibrahim pasha, the victim of a malaise. After about forty toulon lazaret, pariset won bets and it was a great disappointment for him, but posterity did him justice, to see the academy pronounce itself against the theory of contagion that he had established for yellow fever and plague, following the insistent interventions of nicolas Chervin.

From then on, he devoted himself exclusively to the writing of the praises which he had to write as secretary of the academy; he knew how to combine scholarship, the art of formula and the ability to express his ideas with the court. His last years were saddened by the disappearance of his daughter. And an intense melancholy now marked all his actions. His health gradually declined and he died on 3 July 1847; his funeral was celebrated on 8 July in the midst of a considerable influx: his friend, Josep-henri awakened-paris then said to him one last farewell "Death has struck you as a man, but your mind, your intelligence, your works, the most beautiful part of yourself, will live forever in the fascists of science." Emotional by the fate of the trait horses who were crisscrossing the capital and who were particularly ill-treated. On December 2, 1845, Étienne pariset founded La. Society for the protection of animals.

Like the one created in London in 1824, he was the first president until his death. He's buried in the father-lachaise cemetery. 1 sheet of white paper, folded in its center forming 4pp.

Folded down and freed on the back. Handwritten address on the back. Origin of barley or louis boulay. Various folds, a small tear on the back edge.

This item is in the category "collections\letters, old papers\autographs\historical persons". The seller is "amideslivres" and is located in this country: fr. This item can be shipped to the following country: whole world.