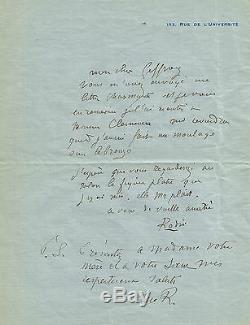 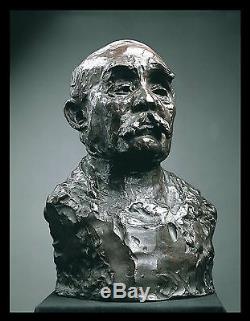 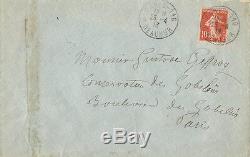 The autograph bookshop of the centuries has specialized for many years in the sale of autograph letters and manuscripts. Manuscripts of those who made the glory of the arts, literature, our history and science during the past centuries. Autograph letter signed by the conservator of goblins, gustave geffroy.

A page in-4 ° on blue paper at his address. Remarkable letter relating to the controversial bust of Georges Clemenceau.

"My geffroy, you have sent me a charming letter, and I thank you for it. I showed it to Mr. Clemenceau who will come back when I made a bronze casting. I hope you will see in the salon the first plaster I put on it.

To you of old friendship. Present to your mother and to your respectful greetings. Ordered in Rodin by the Argentine government, which wishes to thank clemenceau of a series of conferences given in South America in 1909, the portrait gave rise to several sessions of poses and to numerous studies and variants: "in the room which it served as a workshop, a dozen heads of clemenceau, in clay, cut at the neck, rested on the saddles and the consoles. Rodin practiced sculpture as an engraver etching, by states. But the bust did not please a clemenceau who reproached Rodin for having given him the appearance of an old grognard, "he always missed me, he gave me the appearance of an old Chinese grognard.

I have no vanity but, if I have to survive, I do not want it to be under the aspect that rodin imagined. Clemenceau flatly refused that this bust be exposed to the salon of 1914. After ten years of friendship, the two men remained irremediably scrambled. The item "auguste rodin signed autograph letter on the bust of george clemenceau" is on sale since Monday, October 17, 2016.