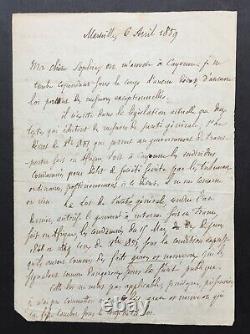 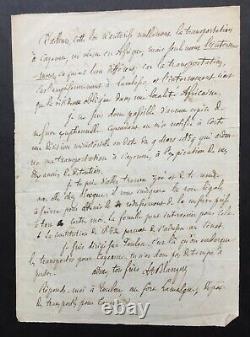 Auguste blanqui rare autograph letter signed exile to cayenne 1859. It essentially defends the same ideas as the socialist movement of xixe and is part of the non-Marxist socialists. Marx and engels, who regarded him very much as the representative of the "revolutionary party of the france".

In 1880 he published the newspaper neither god nor master. He is at the origin of blanquism.

Following his numerous insurrectional attempts (insurrection in 1839, participation in the revolution of 1848), he was imprisoned for much of his existence, almost 36 years, which earned him the nickname of "enclosed." Very rare signed autograph letter, 2 pages, marseille, April 6, 1859, addressed to his sophie barlier concerning the imperial ministerial decision to lexiler to cayenne. In 1857, blanqui was transferred to a Corsican prison in cote, then in africa and then threatened to be exiled to cayenne.

Very interesting letter from the revolutionary who opposes with vigour and conviction to the announced lexil, sets out in detail his arguments to oppose his exile in Cayenne and calls for the urgent help of his family. "My dear sophie, I am sent to cayenne.

However, I am not subject to any decree, any law providing for exceptional measures. There are only two pieces of legislation in the current legislation that enact general security measures. 1° the decree of December 1857 which allows the government to transport either in africa or in cayenne persons convicted of offences of secret society by the ordinary courts, after this decree. It doesn't concern me.

The general safety law rendered last lan authorizes the government to intern either in france or in afrique the condemned of 15 May[manifestation against the national assembly organized by blanqui, which will be worth 10 years imprisonment], those of June 1848 and 1849, those of December 1851, under the express condition that they have committed serious and new facts which indicate them as dangerous to public safety. This law is not applicable because, as a prisoner, I was unable to commit any serious and new facts that would bring me under the law. Moreover, this law does not authorize the transport to cayenne, or even in africa, but only internment, which is very different; for the transport is imprisonment and internment is only the compulsory residence in an African locality. I am therefore not liable to any exceptional measure.

However, I was notified of a ministerial decision dated 9 March1859 ordering my transportation to cayenne, upon the expiry of my ten years of detention. I beg you to go find [his other] zoé on the legal path to be followed in order to obtain the redress of the action taken wrongly against me. The family can intervene for this and the constitution of 1852 allows to address the senate. I'm headed for toulon.

That's where they're taken in for cayenne. So you don't have time to waste. Farewell, your brother blanquied it.

" Shortly afterwards, a small antoine (zoe blanqui), his sur, managed to obtain for him permission to win bets. Blanqui was finally released following the imperial amnesty decree of 16 August 1859 before being again arrested and sentenced in 1861. Good condition sent by registered mail. The item "auguste blanqui rare letter autograph signed exile to cayenne 1859" has been on sale since Saturday 29 May 2021.