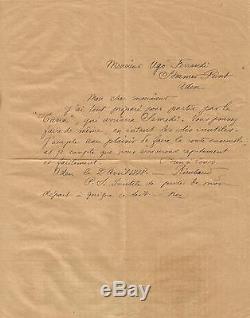 The autograph bookshop of the centuries has specialized for many years in the sale of autograph letters and manuscripts. Manuscripts of those who made the glory of the arts, literature, our history and science during the past centuries.

Signed autograph letter to the Italian explorer, ugo ferrandi. The man with soles of wind prepares his journey to harar and his delivery of weapons to the menelik king. "My dear sir, I have everything ready to leave by the tuna, which will arrive on Saturday. You can do the same, avoiding unnecessary packages.

I am happy to make the journey together and I expect that we will arrive quickly and easily. No need to talk about my departure to anyone. R (im) b (in) d.

At the end of 1887, more or less idle in aden, believing in a possible lifting of the Franco-British embargo on the arms trade on the Somali coast, rimbaud plunges again into his dreams of fortune by the sale of weapons to the menelik king, and decides to associate with armand savored to form a caravan of two hundred camels to harar. Everything must be conducted in the greatest secrecy.

In mid-February 1888, Rimbaud made a round trip aden-harar to prepare the expedition, and rediscovered a pacified harar. He plans to re-establish himself as an independent trader, on traditional products, as a correspondent for several Daden houses, such as those of Caesar tian and Bardey.

On Friday, April 13, 1888, the British steamer tuna sails to aden for the crossing of the gulf. Rimbaud embarks there with the explorer ugo ferrandi who must carry out a geographical mission in Harar. After a stopover of a dozen days in Zeilah, Rimbaud arrived at his destination on May 3rd. However, after several flip-flops, the Ministry of Marine and Colonies finally inform rimbaud, May 15, that arms traffic to the Somali coast is definitely prohibited. Furious with the situation, rimbaud renounces forever the too complex trade of arms on a large scale, and turns to traditional trading (coffee, gums, perfumes, fabrics, ivory), opening a commercial agency in Harar.

Monotonous and desperate activity that will lurk for the next two years. On April 7, 1891, suffering from the right leg, unable to move or work, he organized his departure and was transported by stretcher to Daden, a stop before his embarkation for Marseille, where he arrived on May 20.

Immediately amputated, the poet lives his last months. He died on November 10, 1891 at the Hospice de la Conception in Marseille.

Rimbaud seems to have met the Italian ugo ferrandi (1852.1928) in aden in 1885. Captain in the long course, ferrandi becomes in 1884 agent of the house bienenfeld daden then explorer for the society of geography. The item "arthur rimbaud autograph letter signed ugo ferrandi / aden april 1888. Harar" is on sale since Tuesday, February 14, 2017. It is in the category "books, comics, magazines \ old books, collectibles".