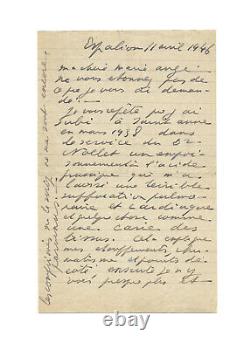 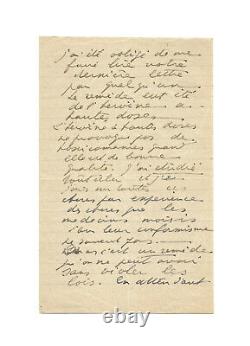 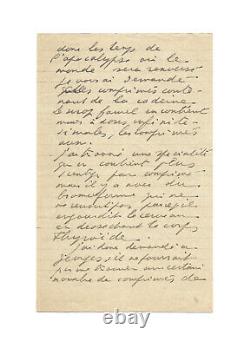 Autograph letter signed antonin artaud to his on-angel malausséna espalion, April 11, 1946, 4 pages in-8 trace of fold depoque, very small spots. Terrible dartaud letter reflecting his deep addiction to drugs. My dear angel bride, do not be surprised at what I have asked you: I repeat to you that I have suffered to saint.

[e] year in March 1938 in the department of Doctor nodet a prussic acid poisoning that left me a terrible pulmonary and cardiac suffocation and something like tissue decay. This explains my choking, rheumatism and side points, then I hardly see any more and I was forced to read your last letter by someone. The cure would have been high-dose heroin. High-dose heroin does not cause addiction when it is of good quality. I have studied all this and I know about all these things from experience of things that doctors mold in their conformism do not know.

But it is a remedy that cannot be had without breaking the laws. So waiting for the lapocalypse times when the world will be turned upside down I asked you for these tablets containing codeine.

The famel syrup contains it but in infinitesimal doses, so do the tablets. I found a specialty that contains more, 1 centigr [amme] per tablet but there is with bromoform that does not succeed me because it numbs the brain by drying out the typhoid body.

So I asked george if he couldn't find me a number of codeine tablets. A hundred is a remedy that acts a bit like heroin but less strong, and which so far does not come under a regulatory prohibition. I also explained all this to your mother in a letter, ask her to tell you if george can't find anything send me 5 tubes of codoform I'll send you a warrant. For I found money, several painters of bets, picasso, heist, giacometti, gruber, want to do an auction to get me 5 or 600 thousand francs. [he adds] the tablets and the syrup have not yet reached me.

Antonin Artaud arrived in 1943 under the supervision of Dr. Ferdière, chief medical officer of the Parraire Psychiatric Hospital, then known as the Dalinesian departmental asylum.

Borrowed from delusions and hallucinations, artaud is interned there for several years and will continue to undergo electroshock despite his many refusals to this devastating therapy. Under the permanent control of drugs and, when he did not have access to them, high-dose drugs, he would not cease to ask his sur and brother-in-law george to provide them.

Artaud said on April 11. However, since the letter had been sent despalion, he must have made a mistake in registering the calendar and it had to be written on 10 April. Indeed, with great administrative difficulties regarding his final release on 10 April, at the end of the afternoon, the Doctor Ferdière sent the car of the psychiatric hospital to espalion with two nurses who were responsible for immediately bringing Antonin Artaud back to rodez.

He shares his bruased return to colette thomas in a letter dated April 10, which was inserted into surrogates and entreaties. He refers at the beginning of the letter to the doctor nodet of the Holy Anne psychiatric hospital, he will say dartaud in 1938: syncretic megalomania: goes to Ireland with the cane of confucius and the cane of st patrick.

Drug addiction for 5 years (heroin, cocaine, laudanum). Literary pretensions may be justified within the limits where delirium can serve as inspiration. Artaud writes your mother well at the end of the letter and it is not a slip of the air. At the same time that he had rejected all religion, he had rejected the very idea of family and did not recognize himself as a mother, sister, brother or kinship. From there, too, the tutuband.

Thanks to the mobilization of his friends, and especially of martha robert and arthur adamov, Antonin artaud manages to leave rodez and settles down at the divry health home run by Dr. Achille delmas where he enjoys all his freedom. An auction was well organized for his benefit during the year 46 thanks to the \"support committee of friends dantonin artaud\" chaired by jeans paulhan, and of which jeans dubuffet is secretary. This committee includes arthur adamov, balthus, jean-louis barrault, andré gide, stone loeb, pablo picasso and henri thomas.

Complete works, volume xi p. The item \"Antonin artaud / autograph letter signed / heroin / picasso / giacometti / art\" is on sale since Friday, January 22, 2021. It is in the category \"collections-letters, old papers-autographs'other\". The seller is \"laurent-autographes\" and is located in versailles. This item can be delivered anywhere in the world.