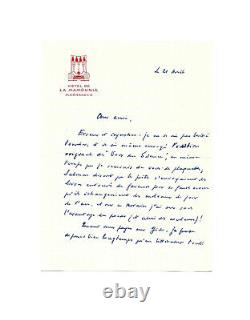 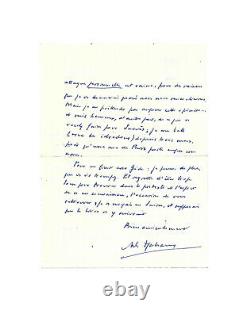 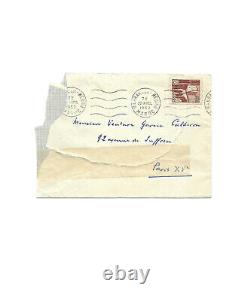 Malraux" in ventura garcía calderón marrakech, 21 April [1952], 2 pages in-8 printed header of the hotel of the mamonia to marrakech envelope autograph attached. Interesting letter from Malrals in response to a murderous criticism directed against "the andregide monster" by ventura garcía calderón. "Dear friend error and injustice: I did not let you down, and even sent you the original edition of the "voices of silence", at the same time as I received from you booklets. [andre] salmon said that the poets sent out books surrounded by favors to make themselves think that they were exchanging gifts of the New Year's day. And on this ground I have on you the advantage of weight (and that of values)!

As for the pages on [andre] gide, I have long believed that in literature any personal attack is futile, for reasons I will give you when we meet. But I do not claim to impose this opinion.

And am very happy, on the other hand, for what you want to do for suares; I have been fighting (with edredons) for three months, so that a street of betting finally bears its name. To end with gide: I think, moreover, that you are mistaken. And regrets being too far away to find yourself under the pretext and the hope of convincing you, the opportunity to meet you again, I believed you in Swiss, and assumed that the book would succeed." André Malraux also evokes the sending of his own work the voices of silence, and his fight for a street of betting to be called andré suares (which will be done in 1992).

Ventura garcía calderón said about gide: "The atrocious man! Disturbed from the genius of dostoevski or nietzsche, whom he turned to singer, he would like, small bourgeois of France, to reproduce the congenital anguish of these two great sick whose influence on the nineteenth century was decisive. What did he, too, invent a evil of the century! Avare, petty, jealous of all the glory of others, pederast by taste but above all by ostentation, it is not angry that he is found at the exit of urinals watching young thugs. He invented the limited print on luxury paper to tell his soft turpitudes and to excite the general public if possible.

" This item is in the category "collections\letters, old papers\autographs\others". The seller is "laurent-autographs" and is located in this country: fr.