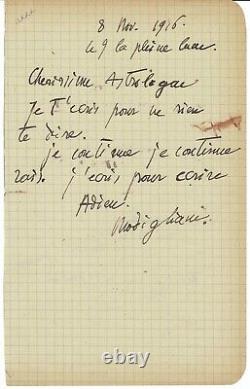 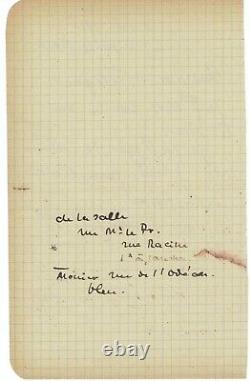 A page in-8° on gridded paper. Extraordinary and moving letter of modigliani, of graceful and melancholic poetry, writing to write, estimating under the moon. The 9th the full moon. I'm writing you so I can't tell you anything.

On the back of the letter, an annotation of the hand of moricand indicates the route to get to rue de l'odion, to the bookshop of adriane monnier, regular refuge of modigliani. Aristocrate bohemian and astrologer de montmartre, conrad moricand (1887.1954) held an open table at his house of pigalle, frequented by his friends painters and writers.

Author of numerous treatises of astrology and occult sciences, leading a existence of bohemian, moricand became friends with many Parisian artists, including max jacob (who prefaced his work the performers), anaïs nin, blaise cendars, henry miller and modigliani so. Modigliani produced, between 1916 and 1918, several sketches of moricand as well as two oils on canvas appearing in the bust. This letter, which could appear, at first glance, as the fruit of a Modiglian delirium or a night of drunkenness, nevertheless suggests a symbolic statement of the artist, given the speciality of the recipient, conrad moricand.

Many drawings and testimonies confirm Modigliani's strong interest in signs and occult sciences. Olivier renault in his book your real duty is to save your dream (editions thousand and one nights, 2020), explains on this subject: "Modigliani was interested rather early in hermetism and mystical alchemy. According to his mother, from the age of fifteen, a friend a little older introduced him to spiritism.

The precision of the lunar position, indicated at the top of this letter, is reminiscent of a similar note which he wrote on the side of a portrait of max jacob in 1915: "the increasing moon". In addition to a fraternity between the two artists, no doubt accentuated by the fact that they were both born on the same day (July 12th), max jacob was an essential link between modigliani and conrad moricand since it was he who, in 1919, prefaced the work of the astrologer, the performers. Max jacob, of course, also frequented, as conrad moricand (as the back of this letter confirms) the house of the book's friends, the bookshop opened by adrienne monnier in 1915, which will become a high place in the literary sphere of that time. More generally, the popular enthusiasm for space and astrological themes is not unrelated to the passage of Halley comet on May 19, 1910, which led to a revival of superstitions around the world. Modigliani alludes to it the day before in a letter addressed to his friend Paul Alexander: "The comet (up to at least six o'clock at least ten) does not arrive.

On the other hand, the formulas used here by modigliani, "I write to tell you nothing" and "I write to write" might just as well imply possible implied by the painter implicitly inciting moricand to analyze his writing, in the hope of being able to read there the promise of a more mild future, after a year that marked for the painter his break with beatrice hastings, British poetess and art critic, met in 1914. It is these formulas that also give all their poetic power to this letter, echoing the well-known passion of the one who fully knew the divine comedy of dante by court and reciting poems by walking the streets or working. Modigliani, however, does not yet know at the time of writing that it is only a decade later that he will meet leopold zborowsi, one of the greatest merchants of his time, who will become one of his faithful friends, on the occasion of the first exhibition "lyre et palette", organized by emile lejeune et blaise cendrars, from 19 November to 5 December 1916 in Montparnasse.

This letter, behind a veil of apparent mystery, allows us to guess, in reality, very rich aspects of amedeo modigliani and his work. It reveals all the poetry of an inflamed and dreaming artist, whose calligraphy itself seems to transcribe all the passion and boldness.

Consult our manuscripts The Autograph Gallery of Centuries specializes in the sale and expertise of autograph letters and manuscripts of the great personalities of past centuries. Purchase / payment methods we accept the following methods of payment: transfers and bank cheques.

The prices shown are in euros and are net. We can also ship by private carrier at your request. Conditions of sale in accordance with the practice of the international league of the ancient bookstore, we accept a guarantee of return within 14 days. The return costs are borne by the buyer.

About all the pieces proposed are originals whose authenticity we guarantee. Our invoices serve as proof of authenticity of the parts sold. However, at your request, we may establish a certificate of authenticity, in addition. This item is in the category "collections\letters, old papers\autographs\historical persons". The seller is "juniennn0" and is located in this country: en.