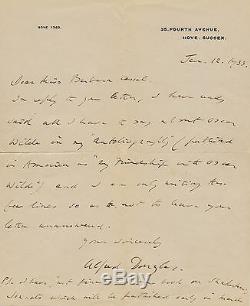 Two large pages in-4 ° square on paper at his address. Superb douglas letter mentioning several times his ex-lover. I have just finished a new book on shakespeare's sonnets which will be published in London. It is called the true history of shakespeare's sonnets. \Which deals with the same subject.

I expect to have an American edition of the book. Two months later, alfred douglas wrote another letter to barbara cassel, explaining that wilde could have taken it as a model for the portrait of dorian gray. In reply to your letter, Oscar Wilde's novel. The picture of dorian gray. It was written about a year ago, it could not have been drawn from his portrait.

The photograph of me in the american edition of my. To which you refer as a photograph of yourself when you were a boy of nineteen, \My personal appearance did not change in time. I was 18 till i was well over 30.

In that respect perhaps i resembled dorian gray. I hope i did not like him in any other way!